120 years of Union Vasca: Everything is ready in Bahia Blanca for this full weekend of Semana Vasca 2019 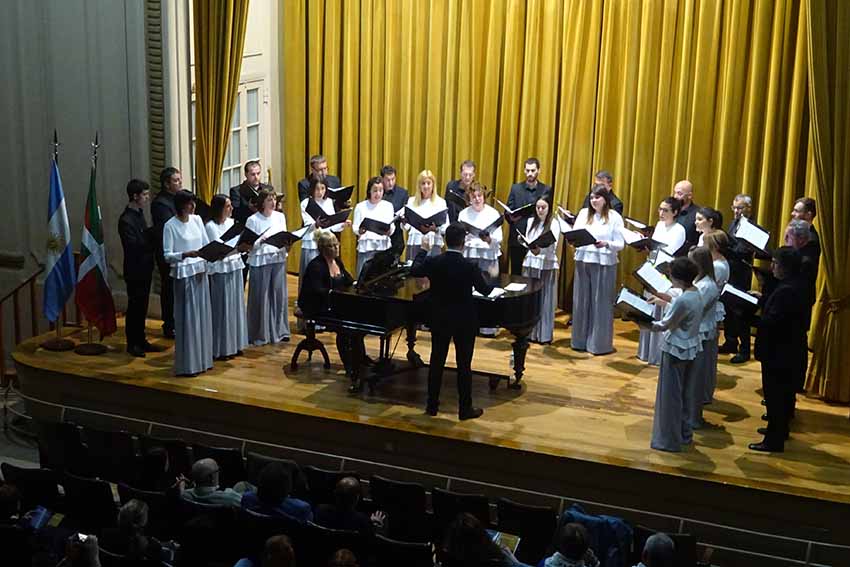 Arriving yesterday from Euskadi, the Oñati Ganbara Abesbatza, performed in the auditorium of the Rivadavia Library (photo EuskalKultura.eus)

Bahía Blanca, Argentina. Even if Semana Vasca events officially began on last Saturday, the second weekend is where the bulk of the activities take place. There are three days from now to the closing farewell luncheon on Sunday for this the epicenter of the annual Basque gatherings in the Southern cone.  This year’s event coincides with the 120th anniversary of the Union Vasca Basque Club in Bahia Blanca, hosts of Semana Nacional Vasca Argentina 2019.

Beginning today, Friday, attendees are anticipating a weekend full of activities.  Delegations and individuals will begin arriving today from all over Argentina as well as from neighboring countries and Euskal Herria.

Representing the Basque Government and arriving from Vitoria-Gasteiz, yesterday afternoon was Gorka Alvarez Aranburu, Director of the Basque Community Abroad.

Along with a large number of European Basque visitors, we found for example, members of Euskal Erria Basque Club in Montevideo, as well as visitors and members of various expeditions and groups from all over the Basque Country.

The following video reflects the atmosphere on Wednesday night at the Union Vasca Basque Club with the contributions of the triki of Xabi Aburruzaga and friends.

Yesterday, Thursday, the Oñati Ganbara Abesbatza Choir performed, directed by Aitor Biain Bidarte, with the local Coral Ensemble Lirio accompanying them.  Following some of the song performed by the txantxikus (as people from Oñati is known by)..

After the concert, a large part of the audience moved to the Union Vasca clubhouse for dinner that was also full of improvised singing.

Diners at one of the facilities improvising “Txoria Txori,” yesterday at Union Vasca during dinner