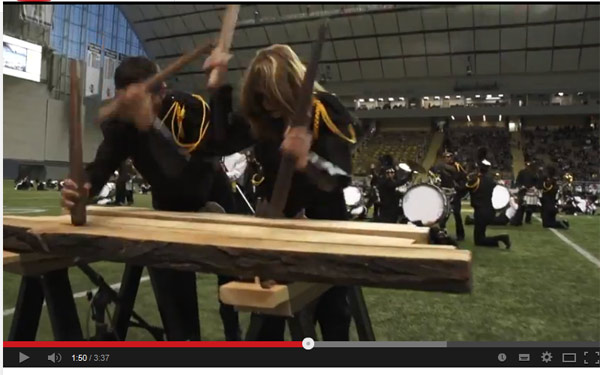 Band members playing the txalaparta in the video

The University of Idaho’s Marching Band published this video that has left us astonished: band members along with music and engineering students have constructed a txalaparta that became the star of the band’s shows, completely American. The idea came from band director, Stephen Basterrechea who wanted to include something special from his roots in the show. “And that they did!”

Moscow, ID. The video that is barely three minutes long is called “University of Idaho Marching Band Txalaparta Project,” tells the story of how band director, Stephen Basterrechea, was able to integrate the txalaparta in its performances.  Not only that: they built a txalaparta, with the help of music and engineering students at the University and now provide an amazing modern version of this ancient Basque instrument in their performances, with an undeniable American twist: stunts, cheerleaders, and a hint of Guns N ’Roses.  Pay attention to the end of the video!

Would we dare do something like this in Euskal Herria?