Trelew, Argentina: the Northeast of Chubut Basque Club will launch a powerful membership campaign in September 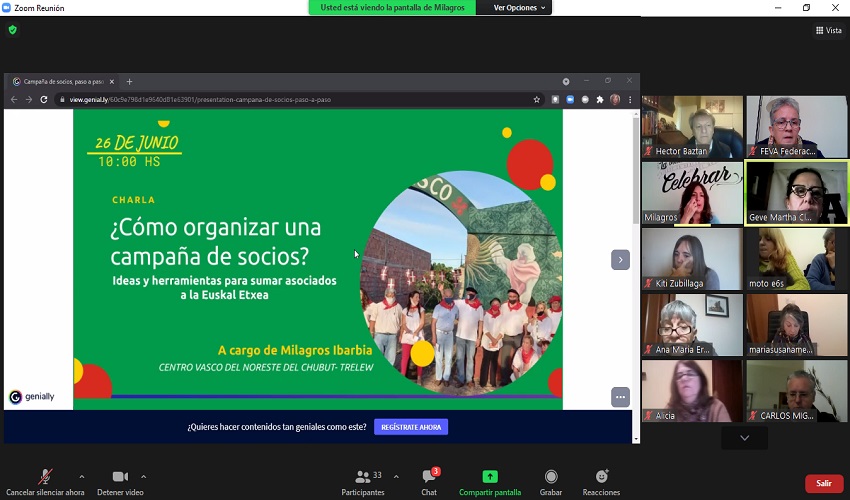 Image from the online talk by Milagros Ibarbia from Trelew, sponsored by FEVA

Trelew, Argentina. Since its reactivation at the end of 2019, the Northeast of Chubut Basque Club continues at a steady pace, fulfilling the objectives to achieve the consolidation of the institution.  An important step was to achieve the sanction of the ordinance of the Municipality of Trelew that grants the definitive cession of the land where the clubhouse is built. Remember that the euskal etxea was built on donated land, as a provisional transfer, but that once the process was completed; the land was definitively handed over to the club.

Having a clubhouse contributes but is not enough to achieve the institutional consolidation, and so the club is now working on a membership campaign to be launched in September.  Milagros Ibarbia, club referent, told EuskalKultura.eus that they have created six videos, each one dedicated to a topic, Euskera, Migration, Gastronomy, Basque Surnames, Music and the concept of the Euskal Etxea.

At the same time, club members continue to work on remodeling the clubhouse, in particular the kitchen, “to open it as soon as possible and be able to hold food sales to generate income,” Ibarbia added.  Besides the Day of the Child (this year, August 15th), they will take presents and snacks to two local dining rooms.

Over the last two weeks they held a talk entitled “How to Organize a Membership Campaign: Ideas and Tools to add Members to the Euskal Etxea,” organized by FEVA and presented online by Ibarbia herself who took the experience at her Basque club as a starting point.  Information on the talk here.

Along with this, they organized a Pelota Paleta tournament “Los Vascos,” to celebrate San Fermin at the Francisco Perez Trinquete at the Trelew Racing Club.  Results and photos here.