The San Fermin Diaspora gathers online and celebrates another unusual July 7th, virtually but maintaining the flame and devotion 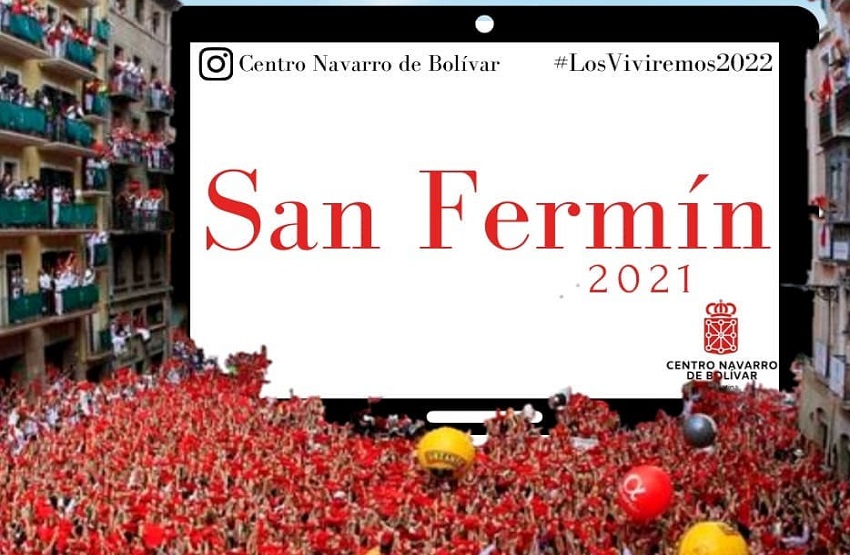 Iruña-Pamplona, Navarre. It is one of the most anticipated festivities in the international context, with the pandemic causing the cancellation of its in-person events in Pamplona.  Even so, the excitement does not wane and institutions in the Diaspora, especially Navarrese clubs, have already held their kick-offs on Monday the 5th with online greetings from the presidents of these clubs in Argentina, Oscar Croce (Rosario Centro Navarro); Martín Urtazun (Buenos Aires Centro Navarro); Gonzalo Erice (Mendoza Centro Navarro) and Miguel Lasa (Bolivar Centro Navarro).

[Greetings from the presidents of Navarrese clubs in Argentina]

These are some of the activities for today and the coming days:

In Bolivar, Argentina, after the Txupinazo and greetings from President Don Miguel Angel Lasa, from the Centro Navarro Bolivar, and vice-counsel, Sr. Walter D’aloia, videos will be shared with typical recipes from Navarre prepared by members of the Commission.  There will also be video presentations by the choir and the dance group will recall performances and present typical costumes. Today, there will be a Zoom meeting for members and relatives. On Sunday, the 11th, at 9:30am mass will be celebrated virtually in honor of San Fermin.  More information, here.

In Rosario, Argentina at the Centro Navarro of Rosario they produced a “libretto,” of Sanfermines, a digital magazine that doesn’t only present the festivities, but also a tour of the Navarrese house and its members.  In the same booklet, you can consult the 2021 San Fermin program in Rosario (page 25). In the Argentine federal capital, the Centro Navarro of Buenos Aires will offer different dishes for “takeout” on July 9th.  There will be more proposals locally, such as locro, and other peninsular ones, such as tortilla.  More information, here.

Distancing ourselves from the CABA and the province of Buenos Aires, the Centro Navarro of Mendoza also opted for a gastronomic option and will prepare its “San Fermin Paella.”  Reservations accepted until July 9th.  Tickets include giveaways.  More information, here. In Spain, other Navarrese centers, throughout the country will carry out various content and symbolic acts of observance of the this year’s non-festivities.

In Pergamino, the Lagun Onak Basque Club will put its kitchen crews to work to create a huge paella that will be sold on July 10th.  More information, here. In the case of the Urrundik Basque Association in Parana they have programed a huge toast via Zoom, today at 10pm.  To request the link: asociacionurrundik@hotmail.com.

In the capital of the province of Buenos Aires, the La Plata Euzko Etxea will celebrate in person.  This will be on July 9th with the following program: at noon: txupinazo, balloon release, Aurresku, and paella, with tortas, Mus, Fandango, souvenir sales.  In Azul the Gure Txokoa Basque Club will join in the celebration online and on the radio with the broadcast of its new program "La voz de los vascos" at 4pm on Azul’s Radio Pública Municipal/

In Venezuela, the Caracas Eusko Etxea will remember the festivities not celebrated during its traditional monthly mass this Sunday at 11am (updated Thursday 06/08, it has been cancelled due to insecurity in the streets).  In Canada, the Zazpiak Bat in Vancouver, in British Columbia will hold lunch and San Fermin activities  with an Agurra at noon; Txalaparta recital at 12:15pm;Txupinazo at 1pm, Lunch at 1:30pm; Basque songs at 2:30pm; Games for all ages at 3:30pm; Mus also at 3:30pm; Encierro at 5pm; 6pm dancing and the Pobre de mi at 6:30pm.

In many other places and clubs they won’t sit idly by, with greater or lesser virtually, they will also join in the commemoration of the date and proclaim the spirit of San Fermines. If your event isn’t included here email otegui@euskalkultura.eus and tell us all about it.  Gora San Fermin!