The Mallorca Euskal Etxea has, thanks to an agreement, its own fronton and facilities in the Son Rapinya neighborhood 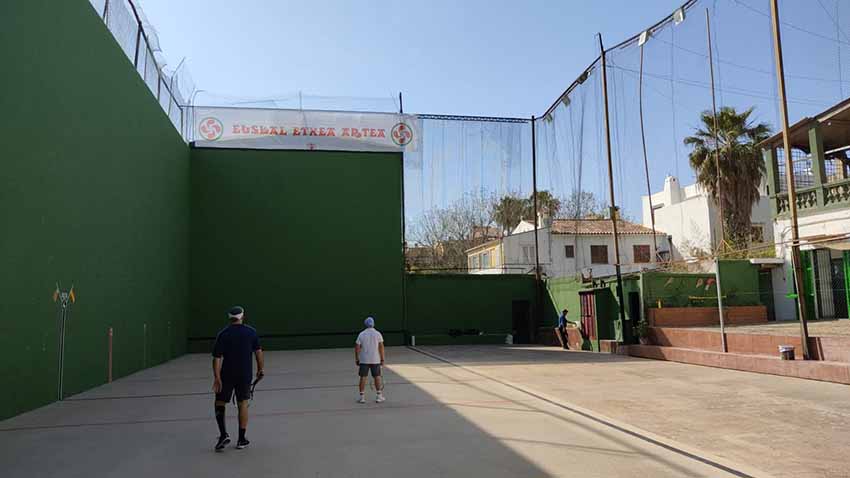 Palma de Mallorca, Spain. The history of the fronton dates back to 1960, when many of the neighborhood businesspeople gave some land to the parish and to the Son Rapinya neighborhood, on the outskirts of Palma.  On this land, with the help of neighbors, all the facilities of Son Rapinya fronton were built.  The ownership belongs to the Church, but the use and enjoyment belongs to all the residents, and not only those of the neighborhood, but also those of the entire city of Palma.

It has always been managed by the Son Rapinya Fronton Club, founded in the origins and in operation to this day.  Both frontenis and Argentine paleta are played fervently, and occasionally handball.  The facilities include a regulation kantxa, and a smaller one where the little ones, accompanied by their parents, can practice. There are also changing rooms with showers and a small bar where pilotaris cool off after playing.

The Artea Euskal Etxea in Mallorca has signed an agreement of collaboration with the Son Rapinya Fronton Club supervised by the parish, through which the Basque club takes charge of the maintenance of the facilities, including the common spaces, this way available for other Euskal Etxea activities.  A clearly visible banner attests to the collaboration.

Members of the Euskal Etxea also play pilota diligently, with events that serve as meeting points for members of the Majorcan Basque community.

One of its members, originally from Llodio told EuskalKultura.eus as the fronton “had saved his life,” and “how lucky he had been,” to meet other Basques there in the same situation.  Currently, some members of the board are studying the possibility of organizing an international pilota championship at the Son Rapinya Fronton Club, with participants from other communities including Euskal Herria.

“The pandemic isn’t helping, but we hope that it won’t be long until we are back to normal and we can launch this sports initiative,” Aingeru Merlo, club representative, explained.