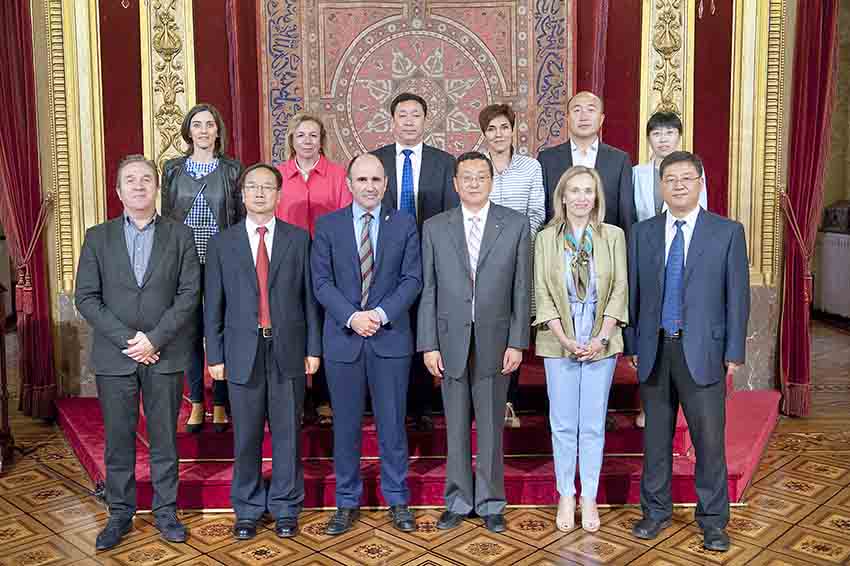 The Vice-president of Economic Development in the Government of Navarre, Manu Ayerdi, and the Vice-president of the Permanent Committee in the Popular Congress of the Province of Gansu, Luo Xiaohu, reaffirmed their commitment to strengthen their institutional relationship, as well as cultural, economic and commercial links, in Pamplona.

Iruña-Pamplona.   The signing of this new commitment took place last Friday in the Throne Room at the provincial government headquarters at a reception Vice-president Ayerdi hosted in honor of the visiting delegation from China. Also attending the event were the Director General of Economic And Business and Labor Policy, Izaskun Goñi; the Director General of Communication and Institutional Relations, Pello Pellejero; and the Director of Service and International Projection, Miren Ausin.

During his addess, Vice-president Ayerdi recalled the International Plan of Navarre 2017-2020 recognizing China as a priority market in the sector of automotive and mechatronics as well as in the agro-food sector.  In addition, he stressed that the implementation of the initiative “The Strip and the Route,” better known as the Silk Road, had opened “another avenue allowing us to expand opportunities of cooperation between our regions.”

Before the reception there was a meeting with members of the corresponding departments in regards to economic development, tourism and culture.  There the visiting delegation was briefed on cultural and touristic activity and was presented a strategy for intelligent specialization in Navarre.  After the meeting, representatives of both parties concluded that there may be other areas of collaboration that must be explored in future contacts.

The Chinese delegations’ program also included a trip to the Public University of Navarre to participate in another work meeting.

Last year, Navarre exported 119.8 million Euros worth of goods, more than double the 55 million that they exported ten years ago and 63% more than in 2015, when they exported 73.5 million of Euros worth.  Between January and April 2017, Navarre exported 46.3 million euros worth of goods that confirms the upward trend after the declines in 2014 and 2015.  These figures place China as the 17th country to which Navarrese companies export most.

The most important sector of Navarrese exports to China is in industrial and technological products whose total weight reaches 70.8%; compared 18.1% for consumer goods and 11.1% for agro-food and beverages.

At the same time, China is an important provider in Navarre. In 2016 5.4% of the imports to Navarre came from this country, reaching some 245 million Euros and with a clear tendency for growth.  According to data provided by the Chamber of Commerce and Industry of Navarre, at least 19 businesses in the province are established in this Asian country.

The Government of Navarre finances two grouped internationalization projects in China.  The first is called Halaco China and includes seven Navarrese business in the food sector that have united to achieve the joint internationalization of various gourmet products, as well as to create a stable export platform.  The second, “Eco Smart City. Products and Services for sustainable and intelligent cities,” brings together two companies that present projects and services designed to meet the challenges of China’s rapid urbanization process.

Together with that the calls for mobility to raise the international profile of the Navarrese young professionals have also funded programs in China, as well as the hiring of technical personnel for Navarrese companies active in the Asian country.

The Chinese Province of Gansu

The province of Gansu is one of the 33 sub-national entities in China.  It has an area of 454,000 km2 and 25.5 million, making it the 6th largest subnational entity and the 6th with the lowest population density.

I has recently gained a new strategic interest with the impulse of the new Silk Road, a land route of goods that will Foster the development of Western China.