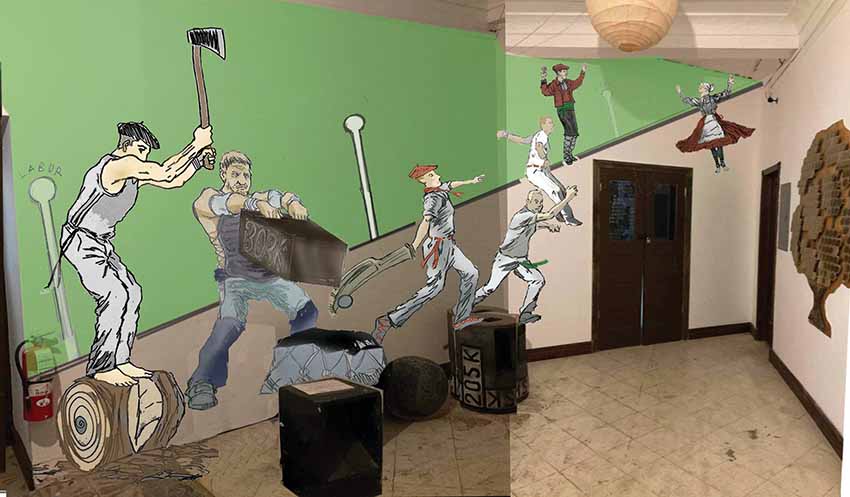 New York, NY, USA. After completing the remodeling of the clubhouse of the Euzko Etxea in New York, the oldest Basque club in North America announced another step that will be a plus to the headquarters on Eckford Street.  The club’s board of directors have approached Guillermo Zubiaga, cartoonist and illustrator originally from Barakaldo who has resided in the city since 1990, to create a mural of Basque motifs. Zubiaga has presented a virtual montage of his idea, a success in the renovated space.

The mural that he will paint in the entrance hall includes motifs related to traditional Basque sports and dance.  Now that the project has been approved, all that is left is to paint it, a task that he will begin as soon as possible.

We would like to take advantage and say Zorionak to everyone supporting this project and Eusko Etxea itself, the club’s board of directors, and members and friends of the Eusko Etxea, as well as to the artist himself for the success of the idea and bringing it to fruition.

[The Eusko Etxea in New York has now joined the list of Basque clubs and communities that have enriched its walls recently with a mural.  Such is the case of the Basque Club of Northeast Chubut, in Trelew; artist Irantzu Lekua, in places like Neuquén or Mendoza; also Eusko Etxea in Corpus Christi, in Misiones; or murals by Judas Arrieta or the renovation of the Basque mural in Boise; artist and former tennis player Mikele Irazusta in Bahia Blanca, or the Tree of Gernika painted at the Union Vasca Basque Club by Patri and Miki; at the Euskaro Basque Club in Montevideo also a mural of Picasso's Guernica, or Guernica in Florida; the mural at the Euzko Etxea in La Plata, in Tres Arroyos….]