700 'Amerikanoak' reunited in Eugi and Zubiri, Navarre enjoyed an intense and emotional day 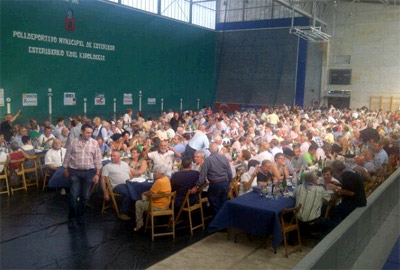 A moment at the meal held at Zubiri's sports center (photo F. Goñi)

Last Saturday the gathering of Basques who worked as sheepherders in the US between 1940 and 1970 reunited more that 700 people in the towns of Eugi and Zubiri, in Navarre. It was a very emotional day, and in some cases the participants hadn’t seen each other in decades, with more than one ending in tears. During the festivities the association “Euskal Artzainak Ameriketan” (Basque Sheepherders in America) was officially presented. This association was created in order to continue the work that was begun at this annual gathering. Laura Igantzi, president of the EAA, told EuskalKultura.com about some of the association’s projects: encouraging research on the influence of this emigration in Navarre, and organizing a trip to the US, potentially to Jaialdi 2015.

Eugi-Zubiri, Navarre.  The weather cooperated during the festitivies organized in Eugi and Zubiri by the association Euskal Artzainak Ameriketan (Basque Sheepherders in America), that reunited more than 700 people.  The group of people, who have selflessly organized this event for the last six years, took advantage this year to officially present the new association.  The American from Lesaka, Laura Igantzi, herself the daughter of one of these herders, is its president and in a conversation with EuskalKultura.com she described the day as being very emotional, “the experiences of these men during those years have remained engraved in their memories, and for them to receive this recognition and to reunite with their friends is very important,” she added.

The day was filled with very emotional moments, like during the mass when the priest knew how to portray the harshness of those many months in solitude.  Moreover, “the choir Auzperri and the group Bankako Menditarrak sang 'Agur Jaunak' and many had to leave the church because they were so overwhelmed by emotion.  In the end, many ended up crying,” Igantzi said.  After mass, there was a recreation of a sheepcamp and a photo exhibit with photos collected by the association.  The day ended with a meal in Zubiri’s sports center.

Delegation from the Government of Navarre

Among those in attendance was Juan Luis Sánchez de Muniain, councilor of Culture of the Government of Navarre.  Igantzi highlighted the importance of the official delegation, explaining that the provincial government is willing to support the association’s initiatives.  Among these projects, notably, is the economic, culture and sociological influence that this emigration had on Navarre.

“Besides organizing the get together and tribute, we would like to encourage research on this subject.  We think it would be a good thesis idea,” Igantzi explained.  This emigration left many traces in the valleys of Navarre: with the money that they sent many renovated the family farm, or bought the first machine, including bringing the first sheep dogs back from the United States, Igantzi stated.

Among the association’s projects is the creation of a photo archive with the more than 1,000 photographs that they have gathered to date, along with other information including names, and documents to eventually become a database.  One of the most exciting projects is to organize a trip to the US.  “Many haven’t had the opportunity to return and we would like to send a delegation to one of the picnics in the United States,” she explains. When? As soon as possible.  “At first we thought that Jaialdi 2015 would be a good time, but many have already told us, ‘and what if I don’t last that long?’”

The association has already started to take steps to make these projects reality.  Currently, the board is comprised of twelve people, and after Saturday's lunch they already have almost 1,000 members.  Anyone who would like to join Euskal Artzainak Ameriketan or contact the board of directors can do so by emailing: euskalartzainakameriketan@gmail.com.

In Memory of her Father

The day was also very emotional for Laura Igantzi, just like the previous five get-togethers, due to the indelible memory of her father, who was also a sheepherder in the West.  “Seven years ago my father was invited to the Artzain Mundua conference (a worlwide sheepherder's conference) in Arantzazu, and I went with him.  When we arrived we were surprised to see how few Navarrese herders were there.  But when they began to talk among themselves about those who still lived there, I thought, ‘This is a treasure!’” she recalls.

Igantzi began to gather names and information from herders seven year ago and organized a small get together in her hometown of Lesaka.  The next step was to organize the first edition of the festival, but unfortunately, her father passed away just before.  “It was a very difficult day.  I thought that it would all end with this day, but people asked me to please continue, and my mother asked that I do it for my dad,” she confessed.  Since then, she has been one of the biggest backers of these reunions.  Now, the birth of the association will help raise awareness and preserve the memory of this experience and those who lived it.