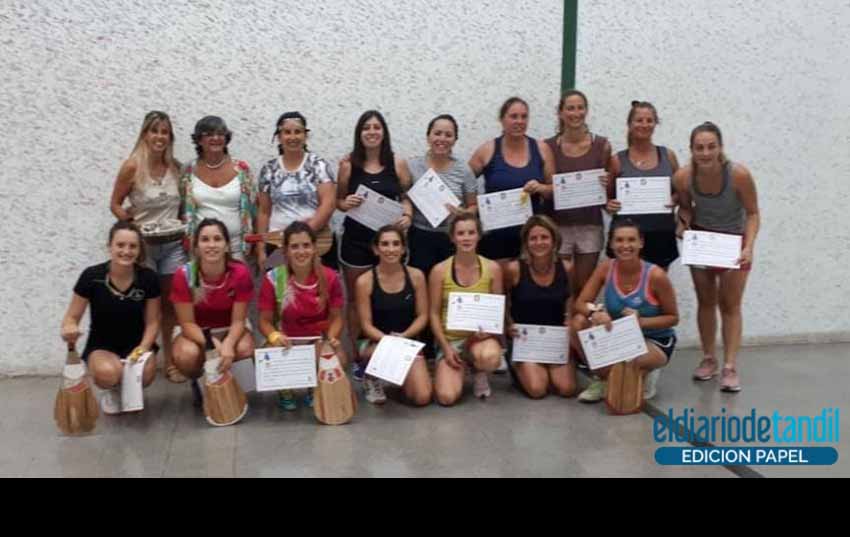 The Gure Etxea Basque Club in Tandil is growing and has included female pilota lessons as well as pilota for kids. Marcos Castillon, the club’s vice-president talked to journalist, Brando Bruni from the Tandil Daily sharing his satisfaction for the local practice of this “Basque sport; and that we can also include women and children is even better,” explaining that the women pilotaris practice twice a week and are also competing at the regional level.

He explained that “It had been a concern for some time in the club. Last year Tina Corbal appeared and immediately started teaching classes.”

The number of women participants is larger, especially keeping in mind that it is an alternative sport and traditionally played by men. Castillon also said that they would like to include more girls this year and are looking at the possibility of adding more classes.

In this way, pilotaris get together twice a week to train and are already participating in different events, locally as well as competing in other places like Necochea and General Belgrano. For example, last weekend, they participated in an important event in Tandil commemorating Women’s Day where women from other cities also participated and were happily surprised with the number of local participants and their level of play.

In addition, the Paleta Federation is putting together a Women’s Provincial Tournament, another game traditionally played by men, with the club competing there as well.

The women’s branch is not the only one recently established. A couple of years ago, we also created a Kids School for the younger set. “Parents were worried by taking their children elsewhere. Some of them then started to teach pelota classes and little by little we now have more than 10 children participating. It is kind of difficult because the children are also involved in other activities, but they have a stable group between the ages of 7 and 10 that are all very close,” he said.

“Besides being a fun sport, it is also family friendly. In my case, my wife, son and I all play. It isn’t just about playing; you stay and visit and have a drink after the matches. You go in family, and the children watch. You see 15-year-olds playing with 70-year-old men and they don’t clash.” Don’t forget the intimate relationship this discipline has with the Basque culture: “It is a Basque sport that includes women and children and so playing is wonderful.”

In this way, the club’s various activities are interrelated. “Women approach dance quicker at the club, and from there they jump to paleta. On the other hand, men start usually with pilota, and some then move on to dance or learn the language.”

Of course, and as is tradition, there are many things that take place at the club outside of the Trinquet. The elders play Mus, and there are the dance groups children, and adults, there are talks about Basque culture and history, and there is a lot of gastronomic activity with pintxo nights and typical Basque dinners. Regarding the latter, this year we included cider pouring and in March we will hold our first dinner with a typical cider house menu.

The amount of activity isn’t surprising keeping in mind the size of the Basque community in our city. “Anyone you run into will tell you that they have a great grandfather or somebody that was Basque. When we hold dinners, they are always full,” Marcos said. All you have to do is walk the streets of Tandil to see the number of cars with Basque symbols on them, like the Ikurriña, not only showing the number of descendants here but also how they keep their culture alive.

Logically, they are not a closed group and want everyone to know what they do.” When we hold dinners and other activities, they are open to anyone wishing to get to know us, and our culture better. We have a great relationship with the local Union of Foreign Communities, and always invite others from other cultures,” he added.

“Thank God that we work well and we were able to put together a nice group, on the board as well as others who collaborate with a strong Basque feeling,” he concluded.