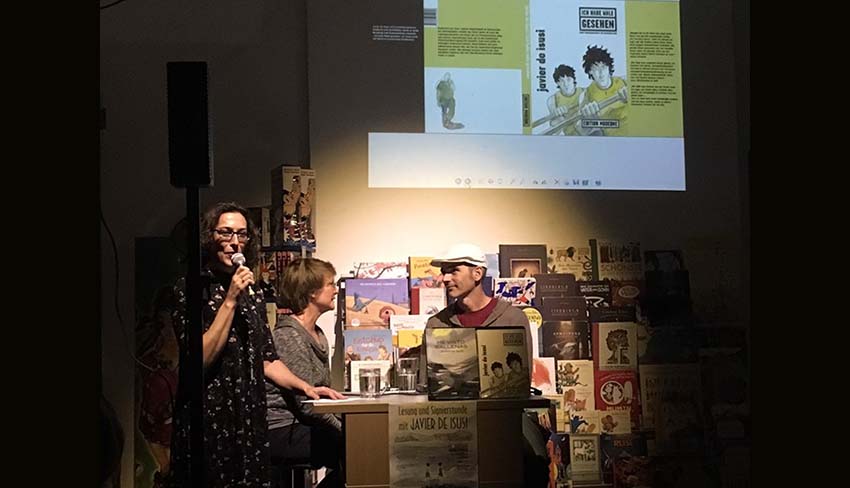 The Berlin Euskal etxea carried out the successful presentation of Baleak ikusi ditut, (I saw whales) by illustrator, Javier de Isusi (Bilbao, 1972) at the Modern Graphics Bookstore that specializes in comics in the German capital.  The author spoke with fans and autographed the three editions of the book that were available there, in Basque, Spanish and German.  “He did so including a drawing along with his signature,” Ainhoa Añorga, Berlin Euskal Etxea president told EuskalKultura.com. Añorga spoke with the author and translator Lea Hubner at the presentation.

Berlin, Germany.   The presentation took place last Saturday, September 9, in the afternoon at the Modern Graphic Bookstore in Berlin that specializes in comics and graphic history.  Javier de Isusi presented the book and explained to those present how it came about, from the first ideas on which the work was based, to its final completion and culmination.  His talk was followed closely by the audience and generated an interesting dialogue, with several questions and answers that resulted in an interesting event that left a good taste in the mouth of its organizers.

“It was the first event that we had organized in this this Bookstore and it was really interesting and enriching,” said Ainhoa Añorga Osa, president of the Berlin Euskal Etxea and one of the presenters at the event.  “There were also copies of Baleak ikusi ditut in Basque, Spanish and German available at the event and several people approached the author for autographs, something that he did very generously including a drawing along with his signature,” she added.

Illustrator Javier de Isasi was in Berlin to participate in the International Literature Festival, thanks to the Cervantes Institute, so the Basque club took advantage of his stay to present his book.