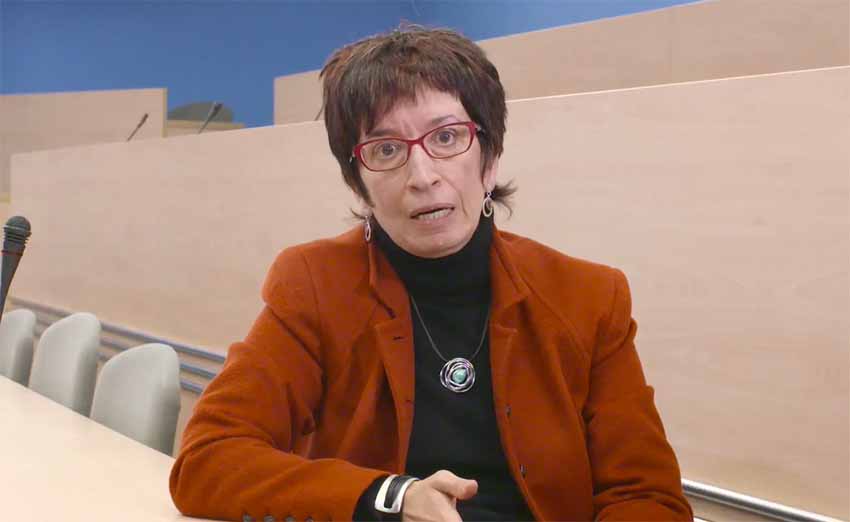 Professor Annabel Martin will give a talk this Friday at the heart of the Bernardo Atxaga Chair at CUNY (photo CanalEuropa.eu)

New York, NY, USA. Throughout the week, October 7-11, the annual academic program of the Bernardo Atxaga Chair will take place at CUNY, City University of New York.  This year, the seminar will focus on the contributions made by Basque culture and literature to peace and reconciliation through new processes, presented by Anabel Martin, Professor at Dartmouth College and expert in Contemporary Spanish Culture.

Entitled, “Bullets and Letters: Post-ETA Euskadi and the Arts”, the seminar aimed at graduate and doctoral students will address the paradigms that predominate in nationalist discourses, as well as the relationship between identity and violence from a gender perspective  The effect that the arts (literature, film, painting and sculpture) can have on peace and reconciliation will also be analyzed.

From this approach, material used in the seminar will include documents, interviews and writings by former ETA militants, as well as of their victims.  The texts include literature by Bernardo Atxaga, Luisa Etxenike and Ramon Saizarbitoria; films and documentaries by Julio Medem, Eterio Ortega Santillana, Asier and Amaia Merino, and Helena Taberna; and works of art by Vicente Ameztoy and Agustín Ibarrola. The seminar will also include the participation of writers Luisa Etxenike, and Bernardo Atxaga, as well as filmmaker Helena Taberna and mediator Esther Pascual.  Etxenike will be there in person, while others will participate via videoconference.

Finally, Professor Annabel Martin will give a lecture on Friday, October 11th entitled, “Words with Skin, Ears that Speak: the Search for the Other in Restorative Judicial Processes.”

The Etxepare Basque Institute launched the Bernardo Atxaga Chair at CUNY in 2011, focusing primarily on supporting the study, knowledge and research of the Basque language and its literature.  The writer himself inaugurated the chair, in September of the same year that annually provides an academic doctoral program taught by outstanding guest professors in the field.