San Fermin has exploded! Not only on social media but adding the first face-to-face events since the start of the pandemic 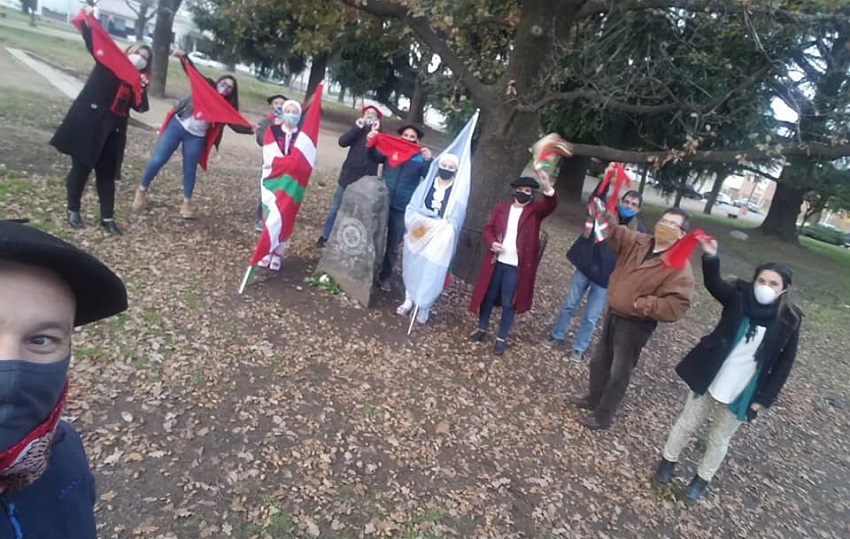 Donostia-San Sebastian. Basque and Navarrese clubs in the Diaspora have colored their social media in red and white.  And despite the profound silence that currently invades the capital of Navarre, nobody in the Diaspora wants Sanfermines to pass by unnoticed. The “Gora San Fermin,” has moved from city hall’s balcony to online, always with the hashtags #LosViviremos, #BizikoDitugu coming from the Navarrese capital.

In the Diaspora, Argentina is usually the country with the most events and programs to celebrate San Fermin.  There, we are witness to some of the first events held outside, the first since the beginning of the pandemic, resuming old customs as part of the “new normal.”  In the case of Gure Etxea in Tandil, that held a small event at the Tree of Gernika.

Also taking advantage of having permission was the Navarrese Club in Rosario, who also held activities outside, who also uploaded them to their social media with current contents like an Aurresku, recorded yesterday, accompanied by a txistu and danbolina.

[Sanfermines 2020, Aurresku at the Navarrese Center in Rosario]

All videos taken by the Navarrese Center in Rosario are available here.

This is also similar to what is happening with the dantzaris from the Centro Navarro de Bolívar, that combined outings, although using precautions, with archival images.

[Dantzaris from the Bolivar Navarrese Center that also celebrated Sanfermines 2020]

It took a lot of effort since the Argentine capital city is in  the nation one of the most affected areas by the virus, but the Buenos Aires Navarrese Center not only had a program uploaded daily to its social media, but it also reached the Parish of San Fermin, that celebrates mass annually in honor of the Patron Saint, this year marking its 60th anniversary.

During these festivities that more than ever needed greetings from authorities, the President of the Government of Navarre, Maria Chivite; the Minister of Citizen Relations, Ana Ollo Hualde; and Mikel Irujo, Director General of Foreign Action sent addresses to the Navarrese community in Argentina.

[Greetings from authorities from the Government of Navarre]

From the Cuyo region, the Denak Bat Basque Club in Mendoza has just uploaded its San Fermin video that includes greetings from authorities as well as from cultural references such as from harrijasotzaile Iñaki Perurena andl sukaldari Karlos Arguiñano, to name a few, along with FEVA President, Arantxa Anitua, or Sara Pagola.  The video also includes music, recipes, and archive photos of prior San Fermin celebrations at the Euskal Etxea.

This is just some of the content that from July 6 to 14 will allow fans of Sanfermines to enjoy the party. Photos, videos, songs and phrases that do not pretend, but instead serve as a bridge and make a worthy transition between the Sanfermines of 2019 and those of 2021 in this year in which the pandemic forces caution.