Published Euskera for Dummies, a basic guide to quickly learn how to manage in Basque 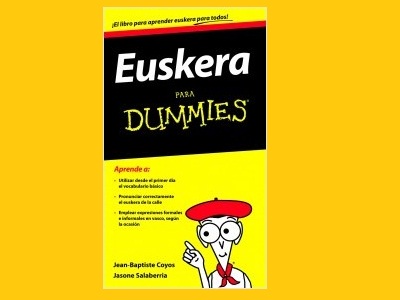 The Publishers of the For Dummies series belongs to the powerful Planeta group and has just published Euskera for Dummies, within its series of practical guides on various themes. The book will allow readers that speak Spanish to obtain basic notions and learn phrases and useful words in order to get along in Basque. The book is the translation of the French version, Le Basque pour les Nuls that was written by Jean Baptiste Coyos and Jasone Salaberria. This book was published in 2009 in France and has been very well received.

Baiona, Lapurdi.  The Publisher of the For Dummies series is, in Spain, part of the powerful Planeta Group that launched Euskera for Dummies last Friday.  This is a practical guide for Spanish speakers who want to learn a little more about Basque and who would like to learn a few useful phrases in order to manage in the Basque Country.  “It isn’t a method for learning Basque, but a tool to get to know a little more about the language and to be able to use it in the Basque Country,” as explained to EuskalKultura.com by one of its authors, Jasone Salaberria.  “It includes basic rules of Basque as well as everyday phrases: like how to order in a restaurant, or what to say in the case of an emergency….”

The book is the translation of the French version, Le Basque pour les Nuls that was also written by Salaberria and Jean Baptiste Coyos and published in 2009 by Editions First.  Coyos was approached to write the book as part of the French series of the For Dummies books, who then asked Salaberria to collaborate on the project.  “We are from the two extremes of the country, he is from Zuberoa and I am from Bizkaia, and this gave us a broad perspective.  Even though we use Batua in the book, we wrote it thinking of French readers and have included many expressions from Iparralde,” Salaberria explained.

The book was very well-received in France and For Dummies was made aware of it at the Frankfurt Book fair according to Editor Nuria Barba.  “We looked through the catalogues of the countries where For Dummies is working best and we saw Le Basque pour les Nuls by Editions First.  Our French colleagues told us that they were pretty happy with this book and that it was being very well received,” Barba assured.  Barba clarified that For Dummies on languages are the most successful in the collection.

Salaberria, on her part, highlights the importance of Basque being alongside other languages and at the same level as them in these kinds of collections.  “This is why I accepted to participate in the project,” she said.

The book can be found on Planeta’s website, here, in both paper and electronic versions.