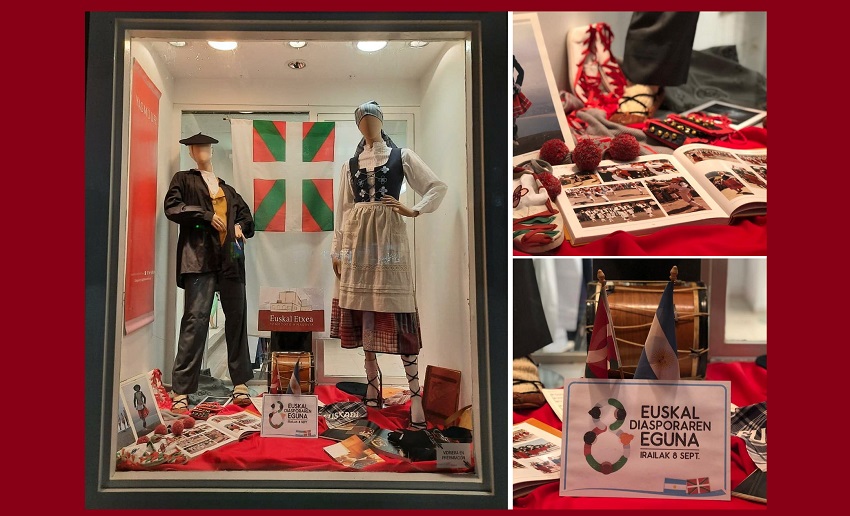 The Euskal Etxea in Comodoro joins in Day of the Basque Diaspora and the local Collectivities festival. Seen here the Basque shop window at Triax

Comodoro Rivadavia, Argentina. The health situation forced the Federation of Foreign Communities in Comodoro Rivadavia to cancel the traditional Festival of Collectivities for the second year in a row, at least in its traditional format of more than three decades.  However, there will be some activities, on a smaller scale, sharing the same objective of showing the community the work carried out throughout the year by communities present in the city

Until September 8th, local shop windows were adorned with typical costumes and instruments from each community. In the case of the Basque Country, the shop window prepared by the Comodoro Rivadavia Euskal Echea Association was at the Triax (San Martin 248), where you can see a pair of dantzaris, an Ikurriña and pamphlets, along with the Euskal Diasporaren Eguna – Basque Diaspora Day logo.

Returning to in person events

After a year without practicing, these resumed in April but were immediately cancelled again as club sources told EuskalKultura.eus.  Now, the local dancers have returned to the clubhouse in hopes of preparing their performance for the Collectivities Gala

According to Edu Vergel, club reference, “like the past one, this has also been a year in which the virtual prevailed.  We celebrated San Juan, San Fermin and even the 98th anniversary of the club virtually (see here). We were finally able to hold mass on July 31st for San Ignazio in person at the San Juan Bosco Cathedral with the participation of the Basque choir,” he said.

The return of the dantzaris to the Euskal Etxea and to stages will inaugurate a new step that in hopes marks the definitive reactivation of in person events in the coming months.