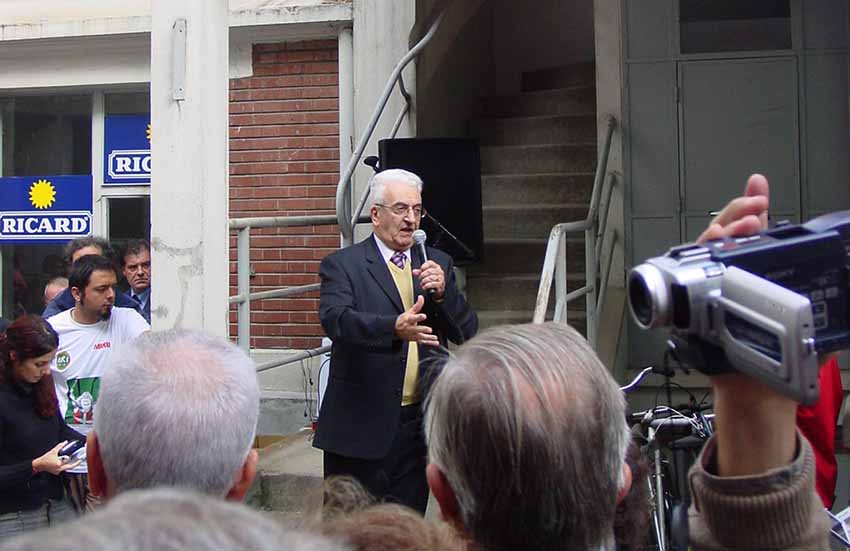 As reported by the Academy of the Basque Language, Piarres Charritton, Euskaltzain Emeritus, passed away in Baiona.  Born in Hazparne, Lapurdi, he was 95 years old.  He lived at various times of his life outside of the Basque Country and was one of the instigators and founders of the Euskal Etxea in Paris.

Baiona, Lapurdi.   With a resume that was as long as it was fruitful, Piarres Charritton, Euskaltzain Emeritus, and one of the last from a key generation of Euskaltzales, passed away in Baiona.  Born in Hazparne, he was 95 years old.  Among the places he has resided are Paris, Rome, and Quebec, and he was also one of the supporters and founders of the Euskal Etxea in Paris.  We found in Auñamendi that he was born in the house named Eulateia in Hazparne, Lapurdi on October 12, 1921. His parents, Pierre Charritton and Gaxuxa Zabaltzagarai, were farmers, and had six children with Pierres being the oldest.

Charritton was educated in his home town, but didn’t have a good recollection about that time, nor about his teachers, except for one.  He decided to dedicate himself to religion at a young age so he let his teacher and priest know, Urruña Iñazio Lazkanotegi.  Because of this decision, he began to help with church works at a very young age.

In 1935 he left for the seminary in Uztaritze where he found a very different atmosphere from that in Hazparne and where he was very much at home.  Among others, Charritton met who would later be an advisor and partner for many years: Piarres Laffite, priest and well-known man in the world of the humanities and Basque culture.  Charritton spent five years in Uztaritze, and later went to Baiona to complete his studies. At that time he began to read Basque authors such as Oihenart (Notitia Utriusque Vasconicae), Jaurgain (La Vasconie) and Campion (Euskariana).

Charritton also began working as a teacher very young.  In 1942, he was a professor in Biarritz at the age of 21, and a year later he returned to his home town to also work as a teacher there.  In the summer of 1944, finally, he returned to the seminary in Baiona to study theology.

The end of the 30s and beginning of the 40s were especially difficult in the Basque Country and Charritton was a direct witness of these times.  He had the opportunity to meet several exiles, the majority of which were fleeing Franco’s repression and Nazis in Spain and Europe respectively.  In 1943, the Charritton-Zabaltzagarai were hiding Russell Kirby, of English origin, in their house in Hazparne for several months.  Despite the fact that many of his peers decided to move to other countries (as soldiers in Africa, or to work in Germany, etc. but he preferred to not move too far away from his town.

After World War II, in 1946, Charritton travelled to Rome to study theology.  He spent two years there but was never able to find studies that would quiet his concerns.  He studied various topics related to theology, but he never found one to focus on and study thoroughly.  Despite all this, Charritton still remembered this time very fondly especially being close to the Vatican, providing him a wonderful opportunity to get to know the structure well, its function and the church’s works.

Pierre Charritton was ordained a priest in his hometown in 1947.  Afterwords he spent five years in Hazparne and Maule working as a professor.  In 1948, he was appointed a corresponding member of Euskaltzaindia, and in 1950 he became the president of Euskaldun Gazteria.  In 1953, on the other hand, he moved to Paris to study philosophy.  After returning from the French capital, he worked as a professor at the Lavingerie College in Baiona.  Before returning from Paris, he also worked as a supporter and collaborator in the creation of the Euskal Etxea in Paris.

In 1960, after verifying that this man from Hazparne already had ample experience in teaching and cultural Management, church authorities left Hazparne’s school in his hands, and ordered him to create the Training School in the same place.  From 1960 to 1965, it was especially difficult due to the work required of him to both create and manage these schools.  Charritton had several collaborators but some of them (Jose Luis Álvarez Enparantza "Txillardegi" and Kristiana Etxalu, for example) were living compromised situations as fugitives. Finally, in 1965, Charritton opted to take a two-year rest and returned to Paris as a professor at the Notre Dame des Champs School.

In 1967 they offered him the job of parish priest in Saint-Amand, a position that he accepted and held until 1973.  From there followed convulsive situations in Euskal Herria and Europe: May of 68, Burgos Trials and the first hunger strike in the cathedral in Baiona, etc.  On the other hand, he continued to give shelter and help exiles from Hegoalde.

In the beginning of the 70s, several Euskaltzale priests gathered and created the group “Fededunak.”  However, seeing that many men of the church were against their objectives and actions, the founders decided not to pursue the original plan.  This didn’t mean, however, that they would not organize other types of activities: in 1970 and 1971, for example, the creators and supporters of Euskal Astea in Baiona were Pierres Charritton, Jean Haritschelhar and Manex Goyhenetche.  In 1972 and 1973, they organized the first courses at the Basque Summer University at the Ravel High School in Donibane Lohizune.  Precisely the courses that served as the first pieces of the Basque Summer University that still exists today.

In regards to theology, Charritton was interested in theology Politics and did a Ph.D. thesis using this as his framework: Le Fondament moral des droits culturels (The Moral Foundation of Cultural Rights).  After his degree, he travelled to Paris and Montreal, Canada, where he was lodged with a Basque family.  It was precisely the Fides Publishing house in Montreal that publishes Charritton’s doctoral thesis, which appeared in the Heritage and Project collection entitled, “Le droit des peuples à leur identité,” (The Right to People to their Identity).

In the mid-70s, Charritton made an important decision in his personal life, left the piesthood and married Aña Durruty in 1976, originally from Aiherra (Behe-Nafarroa) and nurse by profession.  Franco had died by that time, and thinking that the atmosphere in Euskal Herria was more relaxed, the couple returned to Baiona in 1977.

In 1985, Charritton was named a corresponding member of Euskaltzaindia, and this year he completed his Ph.D. in Basque Studies with a thesis on Pierres Broussain (former mayor and euskaltzale member of the general council) entitled, “Piarres Broussain, sa contribution aux études basques,” (Piarres Broussain, his Contribution to Basque Studies.”  His thesis director was Jean Haritschelhar, and he defended it in Bordeaux and shortly after it was published by the CNRS Research Center.

In regards to Politics, Pierre Charritton ran in the elections in the fifth region of the fifth constituency of the Pyrenees-Atlantiques on June 5, 1988 along with the nationalists.  Charritton was also one of the founders of the Eusko Alkartasuna Party in Ipar Euskal Herria.  When the incumbent, Claude Harlouchet passed away in December of 1993, Charritton took his place until the elections held in 1995.

Pierre Charritton’s work has been recognized on several occasions.  In 1996, he was made an honorary member of EIZIE, in 1999, he was awarded the Manuel Lekuona Award by Eusko Ikaskuntza, and in 2006, he was named Emeritus Member of the Royal Academy of the Basque Language.

(In addition to this entry in Auñamendi  by Eneko Zuluaga San Roman, Euskaltzaindia’s website also includes abundant information on the life and work of Piarres Xarriton.  We would like to express our sincerest condolences to his family and friends, and especially to those at the Euskal Etxea in Paris. GB).