Participants in the “Arbasoen Ildotik” Program talk about their experience in Basque America: “An unforgettable trip” 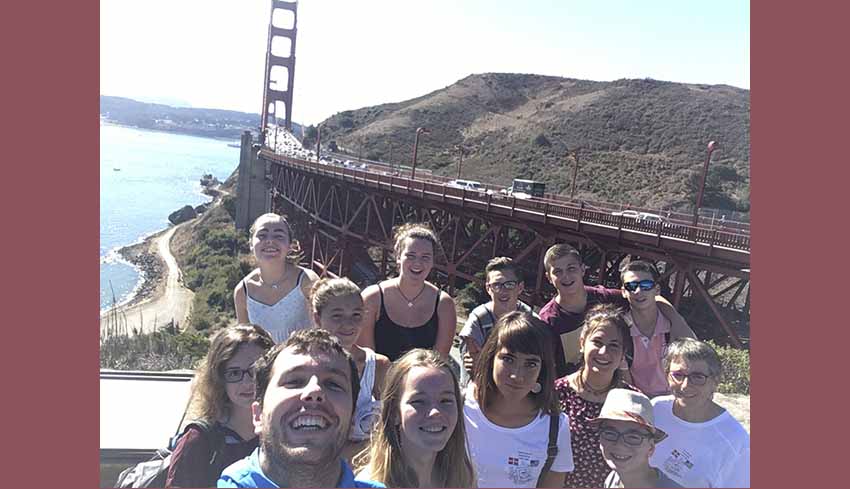 The project included a group of students from the Donostei School in Baigorri (Behe Nafarroa).  It took three years of planning to organize an "unforgettable" trip that lasted just more than two weeks to California and Nevada, following the steps of Basque emigration.  The students were able to get to know and get a taste for “the America of the Basques,” and this is exactly the experience that is told in this following story, in the first person, that we are sharing along with weekly Herria in Baiona.

Baigorri, Nafarroa Beherea. On September 2013, we began the sixth grade at the Donostei School in Baigorri. A few weeks in, the teachers presented us a project called “Arbasoen Ildotik,” whose goal we to spend 18 days in California and Nevada in the (emigration) footsteps of our ancestors. In order to pay for the trip, we organized bakes sales of talo and cakes, a concert, we did a play along with an entire series of activities. At school we study the subject of emigration, as well as interview some of the Basques who at some point immigrated to America. Over these three years, we worked hard, us the students as well as our parents, but until the moment we boarded the plane, we couldn’t believe that we were really going to America. The dream came true and we are going to tell you about it here.

Our Trip, “Hard to imagine”

We spent just over a week in San Francisco with Basque families. Some of us stayed with family members. In San Francisco we visited sites like the Golden Gate, Alcatraz, Chinatown, Lombard Street, the Coit Tower and Fisherman’s Wharf. We rode on the famous cable cars, and sang Basque songs at mass at the French Parish. We toured the vineyards of Napa Valley and attended an American Football Game. On the last day, we participated at a meal at the Basque Cultural Center in South San Francisco. There we realized that this place was Euskal Herria for them. We felt right at home. The city of San Francisco was big and beautiful to us.

On the second part of our journey we took a long road trip towards the south. We stopped in Bakersfield first and there we visited an almond farm with Dominique Camou. Afterwards we were greeted by the family of Martin Etchamendy and visited his sheep ranch. In the afternoon we ate at the Wool Growers Basque Restaurant and on the next day we visited the Echeverria dairy: 13,000 dairy cows. Incredible!

Later we went through Yosemite Park on our way to Nevada, but because of bad weather, we had a longer trip, and weren’t able to see much. In Gardnerville we were welcomed by Marie Louise and JB Lekumberry at the JT Bar and Basque Restaurant. There we met family members, some who spoke Basque, and others who totally American. The next day we visited Virginia City and took a train. We went into a mine from the early days. This city developed in the 19th century with the gold rush. At that time there were a lot of people there, and that is also what brought Basques to the US. We traveled through Bodie, a town that was made famous because of gold. Today it is mostly abandoned. It seemed like we were still in the 19th century; old wooden houses, saloons and motels like you see in the movies….On this day we had the opportunity to talk to a Peruvian sheepherder. He worked for a Basque and sends money to his family in Peru. This is a reproduction of what Basques used to do. With him, we realized that the roles have now changed and now the Basques are the owner/operators, and others, like the Peruvians, are the workers.

We then went to a hot springs in the middle of the desert, we visited a forest and saw tree carvings left by Basque herders in the 50s. Later we went to a school in Reno to share with them. They wear uniforms, they have a slogan, and they don’t have homework. It is more elite….Among us, some of us prefer this system, but others are fine with ours. We also visited a sculpture by Nestor Basterretxea in honor of the Basque sheepherder. Before returning to San Francisco we went to the oldest ranch in Nevada, with the Lekumberry family, in Genoa. We also stopped at Lake Tahoe.

Since we got back we have put together a photo album to preserve our memories. We are also putting together a movie with the help of Kanaldude, with images that we took there. We would like it to be done in June. We will let you know when it is finished. Meanwhile, we wait for our friends form the US, so that we can welcome them here, the best we can.