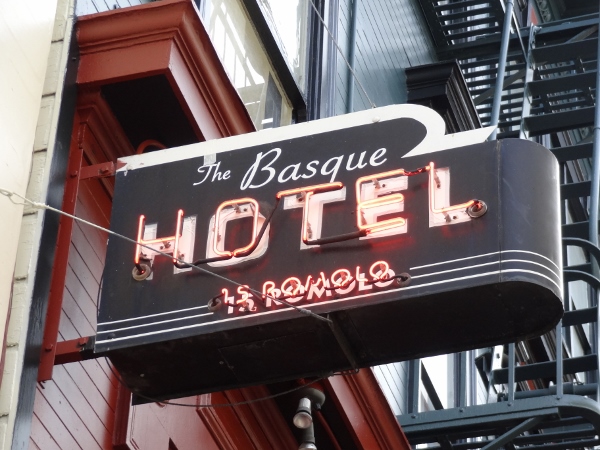 The neon sign at the Basque Hotel in San Francisco just a few weeks ago (photo EuskalKultura.com)

Californian Matthew Iribarne published an article entitled “Remember when __ used to be __? Matthew Iribarne reminisces about what once was in San Francisco" where he describes past places and personal stories of the city over the last few decades. Among different places, he mentions the old Basque hotel founded by Basque that although transformed, is still open today in the small and steep Romolo Street in North Beach.

San Francisco, CA, USA.  “The city has changed a lot in these past 20 or so years. And yes, everything changes. Time may change me, but I can’t trace time. Then again, maybe I can trace it, just a little. Here’s a breakdown of some of the places in San Francisco that I once frequented – what they were and what they are now, these occasional secret histories that surround us,” is how Matthew Iribarne presents this article with a note of nostalgia published on the Bold Italic website.

Among the various places and establishments, we find this reference and remember the old “Basque Hotel,” on Romolo Street that was still owned, up until a couple of years before the turning of the century, by its last Basque owner, Jean-Emile Idiart from Ortzaize.  In Matthew Iribarne’s words:

15 Romolo used to be the Basque Hotel Restaurant (1964–1996). It’s now a bar, not so much a hotel, and I can get a little emotional when I write about this place because, well, I’m Basque. Also, there’s the fact that I have so many fond memories of this restaurant. The long communal tables where the patrons ate together, family style. The Picon Punch, orangish and tart, one glass was never enough. The food, depending on what day of the week it was, could be trout with lemon sauce, leg of duck or oxtail stew, Chicken Basque. Soup came first, salad last, wine was everywhere.

The portions were generous and always, always, always, there were French fries. Years later I set foot inside 15 Romolo and asked the poor doorman where the hell the restaurant was, even though I knew it was gone.

He said there was still the hotel, but that it wasn’t really a Basque hotel. So then, why was it still called the Basque Hotel? He didn’t have the answer. And what could he say? What could anyone say?

It’s just another place that’s gone and transformed from one thing to another, it happens everywhere. Time moves on. History is told through the memories of those of us who were there. Seals Stadium. Winterland. Playland at the Beach. The list goes on and on.