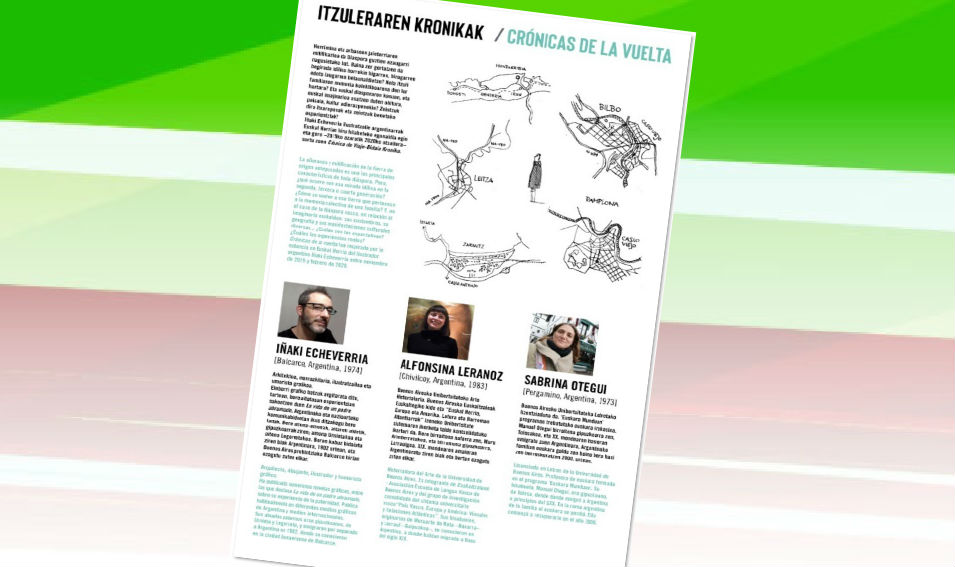 Hondarribia, Gipuzkoa. Itzuleraren kronikak-Chronicles of the Return is comprised by a selection of illustrations and texts by cartoonist Iñaki Echeveria inspired by his stay in the Basque Country at the end of 2019, created from the perspective of someone who “when he goes to the land of his ancestors, is also returning.”  The project, which will be presented tomorrow at the Hondarribia House of Culture, includes the work of two other Argentine Basques, in which, in addition to Echeverria himself are Alfonsina Leranoz and Sabrina Otegui.

The exhibit includes 14 banners, many of them associated with specific towns and cities in the Basque Country, with text written in Argentina in both Spanish and Basque.  The idea of having the chronicle in two languages came from Basque teacher and EuskalKultura.eus correspondent, Sabrina Otegui, who was in charge of the Basque part.  The project that will be presented this year as an exhibit will move into another phase in 2021 with the publication of a book by the same name.

Exhibition and Conference “Art in the Argentine Basque Diaspora”

Itzuleraren kronikak-Chronicles of the Return will open tomorrow, November 27th at 7pm in Hondarribia and will be available to visit through December 13th from 10am-6pm.  Alfonsina Leranoz is in charge of its inauguration who had a central role in the project’s completion.  Leranoz will also write the prologue to the book, as an Art historian with a degree from the University of Buenos Aires and preparing a Doctorate in History at the University of the Basque Country and UNSAM.  She is currently in the Basque Country working on her thesis on the role that art plays in the construction of identity of the Basque Diasporas of Argentina and Uruguay.

The project enjoys sponsorship from the Juan Celaya Letamendi Foundation Talka Galeria, City of Hondarribia and Arma Plaza. The talk will begin at 7pm in person; due to COVID-19 protocol there will be checks at the door as well as in the hall beginning at 6:30pm.  Admission is free.