In-person Basque festivals are back in the US and Canada: Elko, SCBS, Vancouver, Buffalo, Salt Lake, Boise… 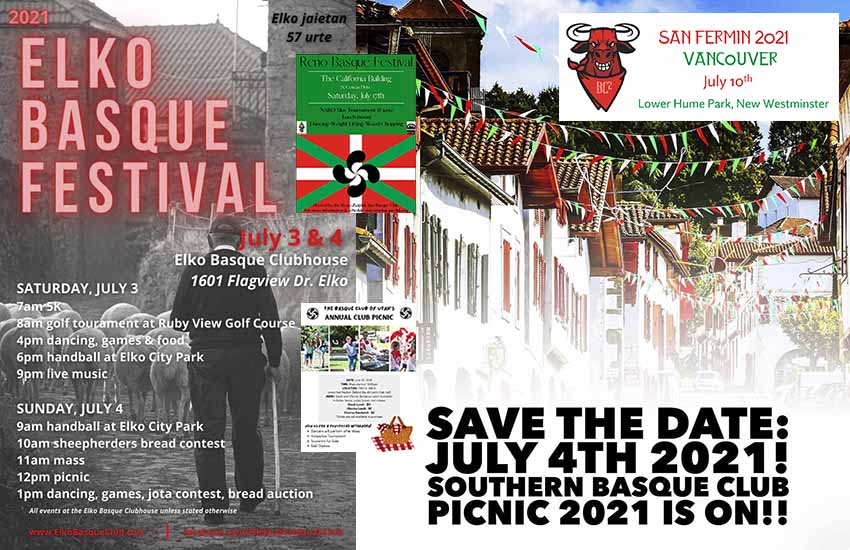 Elko, NV, USA. With vaccination progress in recent weeks there has been a substantial change in the United States in relation to the pandemic.  Also in other parts of the world, in some cases seeing the light at the end of the tunnel (as in Europe), although unfortunately, in others, such as in Latin America, uncertainty continues to dominate.  This article is about summer in the US and Canada where every year at this time Basque festivities and gatherings take place, so we will refer to what the panorama looks like now after an extensive de-escalation north of the Rio Grande.

Just two months ago, it seemed that there would not be any Basque events for a second year in a row  Elko was nearly the only exception, along with a couple more, with uncertainty and cancellations prevailing elsewhere.  Elko announced its festival on its traditional date, July 4th, and the Southern California Basque Club cancelling their event on the same weekend.  The Chino Basque Club was also inclined to cancel, although its event is always the first weekend of September.

The progress made with vaccinations and their effects on the pandemic have radically changed the panorama, so that practically all of these traditional dates are back on the calendar. And so the Utah Basque Club will celebrate on June 27th in downtown Salt Lake, Elko Euzkaldunak will hold its festival July 3rd and 4th, and the Southern California Basque Club in Chino will also hold its event on July 4th; the Zazpiak Bat Basque Club in Vancouver, Canada, will celebrate San Fermin on July 10th and the Reno Basque Festival organized by the Zazpiak Bat Basque Club in Reno, NV will hold its picnic on July 17th.  In Boise, Idaho, the celebration will be the traditional San Inazio on July 31st and August 1st (as always the Boise Sunday celebration at the Park will be just for members, this year with no Basque Block events)...

There will be more Basque events this summer in the US (Fresno, Susanville, Buffalo, Seattle, Winnemucca, Chino...) that we will publish as updated information is received.