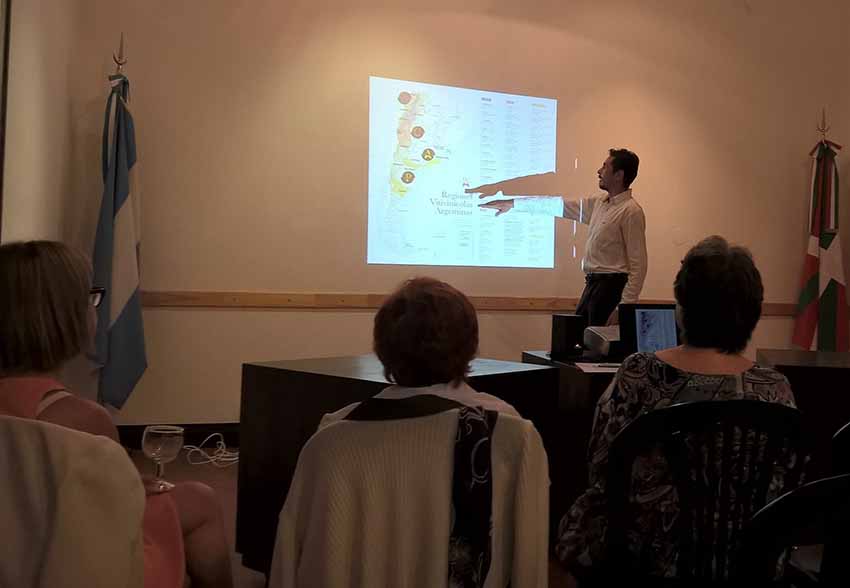 Talk and wine tasting at Eusketxe thanks to Sommelier Diego Rey

Eusketxe, the Eusko Kultur Etxea in Buenos Aires has begun its summer vacation, but not before finishing its work.  In a busy month of December it celebrated Euskera Day, held it annual General Assembly, and announced the results of the Story Contest (that you aready red about on EuskalKultura.com) and even held a wine tasting, showed the film Beltzean Mintzo and held a week of talks on Cultural Routes in Euskal Herria.

Buenos Aires, Argentina.   Eusketxe held its Annual General Assembly on the same day it celebrated ENE, International Day of Euskera.  The results of the elections for the board that will guide the club in the next term (2017-2019) follow:

After the General Assembly, club president, Maria Elena Etcheverry de Irujo Ollo addressed the attendees referring to Euskera and its central role in the culture and the Basque world.  The winners of the club’s literary contest were announced and the film Beltzean mintzo (voices in the dark) about native languages in the Americas was shown.  Afterwards there was an interesting debate that lasted for more than an hour.  Maria del Carmen Echevarne performed an Aurresku in honor of Euskera, and finally sommelier Diego Rey guided those presents through a wine tasting.