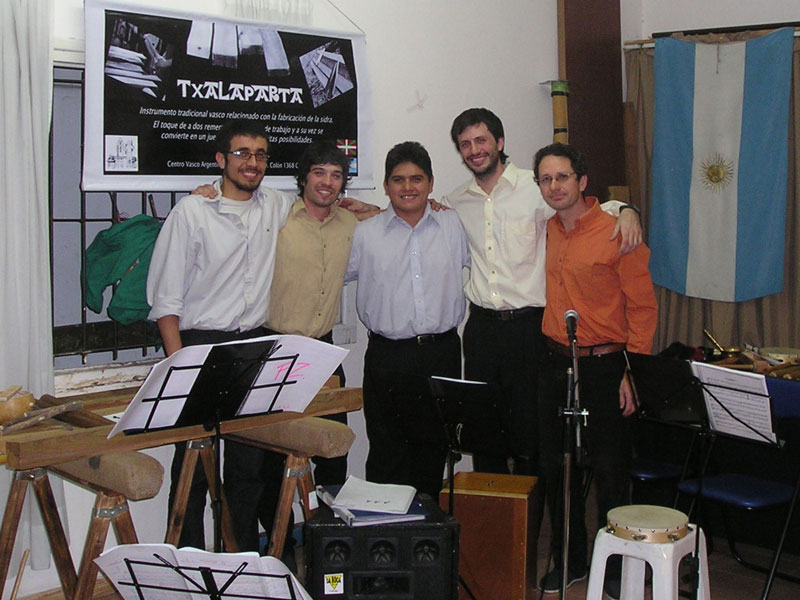 The 'alboka', a traditional Basque instrument formed of wood and ram’s horn, took center stage in a concert organized by the Gure Txoko Basque Center of Cordoba, Argentina this past July 3rd. 'Gure Txokoa', which literally means 'our little corner', is located in the city of Cordoba and home to the Basque-Argentinean Baietz ensemble. They make their own traditional instruments and enjoy Basque music playing and teaching instruments that hold names such as alboka, txalaparta, xirula or kirikoketa.

Cordoba, Argentina. Some 70 people came together last Friday evening to hear the group perform an array of music, both traditional and modern. The audience enjoyed such works as 'Odolaren Boza' of Ibon Koteron, 'Leonen Jota' of León Bilbao, and 'Alboka Zortzikoa', of Juan Mari Beltrán. In addition to these melodies, those in attendance were treated to the voices of Carolina Aguerrido, Noé Fernández Brizuela and Fernando Zabalza. This performance brought an end to one touring season, and left listeners expectant for the following, which is set to begin in August.

The focus of the new concert series will be music from distinct regions of the Basque Country, beginning with the province of Gipuzkoa. In addition, the tour will include workshops on the construction, execution, and ensemble of several traditional Basque instruments. Among these will be the 'alboka', as well as the 'txalaparta', a large, typically wooden percussion instrument, and the Basque flutes 'txistu' and 'xirula'.

The Baietz ensemble is unique in that the majority of its members, though they may claim a strong Basque heritage, hail from Argentina.  Its members have cultivated a strong passion for both making and playing traditional Basque instruments, and keeping this art alive even in a land far from Euskal Herria. The ensemble is formed by Noé Fernández Brizuela, Agustín Alonso, Franco Seghesso, Fernando Zabalza y Gaspar Jaurena, all of whom have studied music at the university level, and have spent years studying ancient texts in order to learn about the construction and use of traditional Basque instruments.

Although they have dedicated much of their lives to the study of Basque music, the members of Baietz are also committed to sharing what they have learned with the community around them.  The performance given on July 3rd was just one of a series of concerts that took place this year as a tribute to traditional music from the Basque Country.  In April, an opening concert was played with the whole gamete of instruments, as an introduction and foretaste to the series.  In May, a performance was given with a diversity of Basque flutes, and in June, the “txalaparta” played the protagonist. The most recent and final of this concert series left audience members with a new appreciation for the “alboka” and a sense of expectation for those performances yet to come.