Argentina: The Basque Government requests rectification from President Fernandez in regards to his remarks about Euskadi

FEVA’s note; as well as that from the Basque Government’s Delegation in Argentina requesting rectification of remarks by President Fernandez

Buenos Aires, Argentina. To the FEVA note, which we reported on yesterday, we must add that of the Basque Government. Remember that President Fernández, when presenting the measures and the situation in Argentina on the occasion of COVID-19 this Friday, cited the case of the Basque Country as an example of what he does not want for Argentina and, and as a path it should not take, stating that “If you have some experience with what has occurred in Europe, you realize that when the health system is saturated, mortality doubles or triples " "This is what happened for example in the Basque Country, when the health system was saturated, and unfortunately they had to choose who was saved and who died. We did not have to go through that, we do not want to go through that," he said.

The Federation of Basque-Argentine Associations responded to these claims, as well as the Basque Government through its Delegation in Buenos Aires.  Following are the two texts made public by FEVA, that we reported yesterday, as did the Basque Government (letter and press note respectively).

Here is the text from FEVA:

With our highest consideration: Faced with the manifestations of the President of the Argentine Republic at the press conference of the day and date referring to the Basque Country, the Federation of Basque Argentine Entities is obliged to make the following clarifications: The health system of the Basque Country did NOT collapse [sic] .. As the accompanying Basque Government documents show, the situation in the Basque Country was not nearly similar to that of other communities in terms of the collapse of the health system. On the contrary, resources were administered in a better way and with less suffering than was intended to be exemplified in that discourse.

That is why it is difficult for us to understand why this was mentioned, which unfairly, painfully, and unfortunately damages our homeland.”” "We remain at your disposition for any further clarification that you deem necessary and, in the meantime, we leave here having clarified the true situation and actions of the Basque Country. We send you a fraternal greeting." The letter is signed by the president of FEVA, Arantxa Anitua, and the secretary of the entity, Carlos Miguelena. 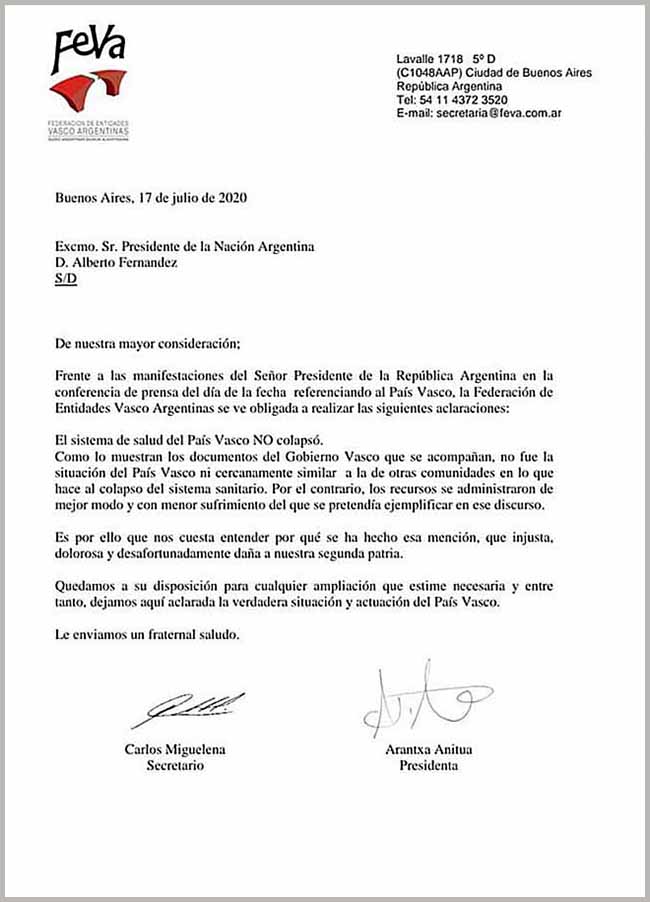 On behalf of the Basque Government’s Delegation in Argentina and Mercosur comes the following:

The President, Mr. Alberto Fernández, in his press conference on July 17, while addressing Argentine citizens in relation to the pandemic, made a reference to the Basque Country and stated that "in the Basque Country when the capacity of the health system was saturated, unfortunately it was necessary to choose who was saved and who died, pointing out the falsity of such an affirmation, in addition, and given the extremely sensitive issue and the serious damage it can cause to the reputation and image of the Basque Country in Argentina, a public and immediate rectification has been requested.

Since the pandemic began in the Basque Country, the Basque health system has offered quality care to all people affected by COVID-19, both to the mildest cases and to those who have presented the most serious symptoms and required admission. This has been recognized by the Basques themselves. In fact, the Basque health system has cared for all patients in the health facilities themselves, without resorting to field hospitals or other inadequately prepared facilities, and without in their Intensive Care Units reaching full capacity.

It is worth noting that the Autonomous Basque Community of the Basque Country also adopted measures preventing the expansion of COVID-19 including before the WHO officially declared it as a pandemic and that since the state of emergency was lifted, it has been applying the Close Surveillance Plan for cases and contacts, which allows immediate “surgical” action.

In the midst of the pandemic, the Basque Country has shown signs of solidarity and its healthcare system has treated patients from other Autonomous Communities sending supplies, mainly respirators.  Currently, professionals from the Basque Health Service are in Peru collaborating in the care of COVID-19 patients.

Besides the pandemic, Euskadi is the Autonomous Community with the largest investment per capita in health in the Spanish State – 1.801 Euros. 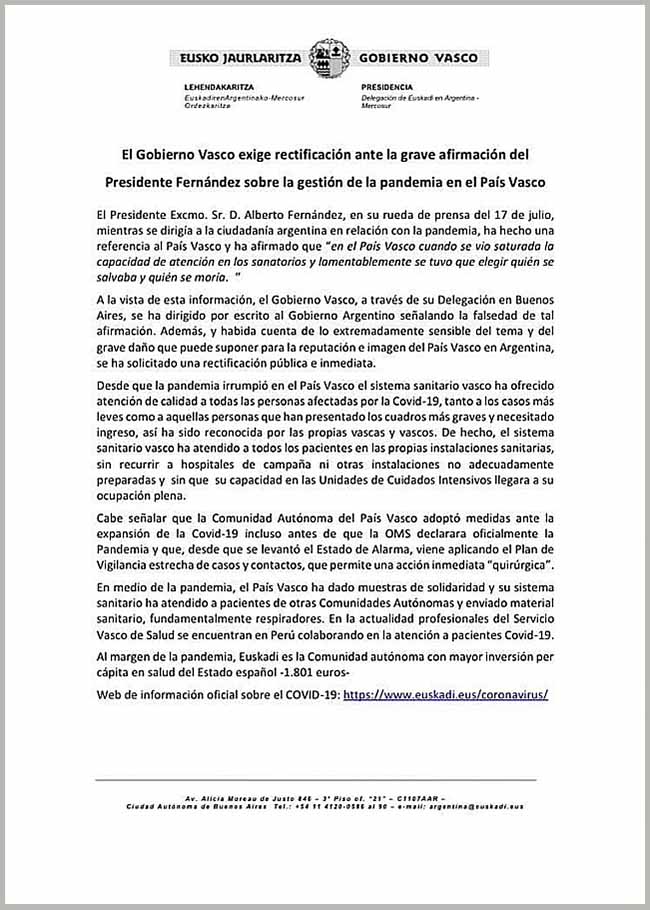