Ambassador of the Philippines, a country with strong Basque history, received by the new Lehendakari 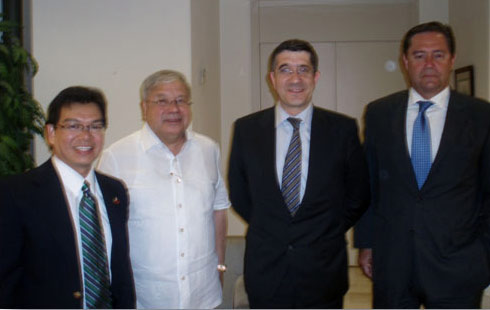 Manila, Philippines. A Filipino ambassador was the first envoy to be received by the new Basque president, according to the Department of Foreign Affairs of the Philippines. Philippine ambassador to Spain Antonio Lagdameo met with new Basque Lehendakari Patxi López in Vitoria-Gasteiz last July 9.

"Ambassador Lagdameo is the first foreign envoy to be received by President López who assumed the Basque presidency on the first week of May. Ambassador Lagdameo briefed President López of ongoing (i.e. academic exchange, deployment of Filipino health workers, Palawan development project) and proposed projects (fishery project in Casiguran, Aurora) between the two countries," the Government of the Philippines said on its website.

Lagdameo also extended an invitation to the Basque leader to visit the Philippines in the near future.

President Lopez expressed strong interest in and support for the efforts being made by the Philippine Embassy in Madrid in intensifying Philippine-Basque relations. The Philippines and the Basque Country have developed strong and active relations in recent years.

"The Basque Country holds a special place in Philippine society. The Basque people contributed greatly to the political, economic and social development of the Philippines during the Spanish colonial period," the Government of Philippines said.

"Descendants of Basque immigrants in the Philippines continue to play a prominent role in Philippine society such as the Aboitiz, Ayala, Elizalde and Zubiri families," the Philippine Department of Foreign Affaires said.