After its big 20th anniversary party, the commemorative program continues at Hiru Erreka with a visit from Patxi eta Konpania 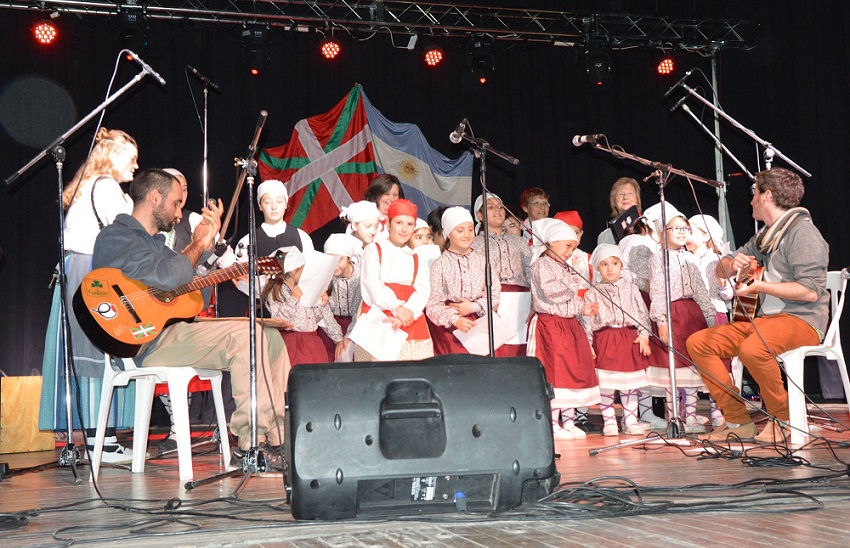 Tres Arroyos, Argentina. The Basque club in Tres Arroyos celebrated its 20th anniversary on October 19-20 very successfully. Now, the program of commemorative activities continues specifically this coming week with a dance workshop taught by Patxi eta Konpania and the screening of the film Dantza.  The dance workshop will be taught by Patxi eta Konpania, who are from Lapurdi, on Tuesday, November 5th at 7:20pm.  The film Dantza will be shown with its director, Telmo Esnal and first dancer, Gari Otamendi, both attending on Thursday the 7th at 8pm.

The main festivities for the club’s anniversary began on October 16th, the actual date of its foundation with mass.  The bulk of the program took place on the weekend, with a music workshop organized by FEVA and taught by musicians, Juan Manuel Hiriart, Nerea Balzola Aguilera and Aitor Hormaechea, from Denak Bat in Mar del Plata.  Workshop participants came from clubs in Azul, Tandil, Viedma and Tres Arroyos.

The day include a big Basque dance that included choir performances by choirs from the clubs in Cnel Pringles, and the Municipal Youth Choir from Tres Arroyos.  There were Basque food stands, Mus tables, and a section for Euskera and information on surnames, and children’s games.  On stage there were dance performances by the local dantzaris. “It was a huge demonstration of the activities that we carry out daily at our Basque club,” sources from Hiru Erreka told EuskalKultura.eus.

The Federation of Basque Clubs in Argentina – FEVA, was represented at the festivities by Juan Jose Olasagastia, who was accompanied by Professor Cesar Arrondo.