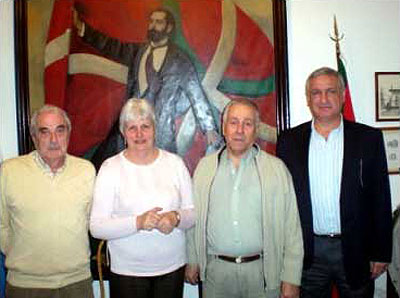 The Zazpirak Bat center was built by Basques in Rosario, Argentina in 1912 and has since worked tirelessly to preserve and disseminate the Basque culture on this side of the Atlantic. It has not only had the support of its partners and friends, but also the city that surrounds it and the Basque Autonomous Community, which appreciates and supports the initiatives carried out in the Diaspora. Now that the time has come to celebrate a very special birthday, “Zazpi” is inviting all of its partners to join the festivities, Argentinean Basques, as well as other cultural references, including sports and political figures of Euskal Herria. In order to contact people and extend invitations, a delegation from Rosario is currently touring the main cities of Euskadi.

Rosario, Argentina.  By the end of 2010, the managers of this Basque Center were already anticipating that 2011 would be a year of great preparation for its great Centennial celebration that Zazpirak Bat will enjoy in 2012.  Such a special occasion calls for a special celebration.

That is why the Basques in Rosario haven’t wasted any time and started holding meetings in May to brainstorm and plan the various celebrations that will take place.  The Organization, however, has surpassed the limits of the city, and even the country, with a delegation composed of the president of the Basque Club Enrique Otaño, Secretary Nélida Apesteguia alongside Felipe Eiheragibel and Luis Maria Barrandeguy who traveled to the Basque Country last week to “contact some of the main political, cultural and sports figures, and invite them to participate in our center’s celebration,” as explained by Zazpirak Bat’s press officials. The officials also mentioned that “they have been asked to participate in various radio and TV programs," since many were already aware of their trip from having heard of it on their radio program, “The Word of the Basque – Gora Euskal Herria.”

The months are passing and the centennial is getting closer and closer. “One Hundred Years of Nationalism” is the motto, and obviously the organizers will not hold anything back so that Zazpi enjoys a celebration that measures up to what has been experienced during its first century.