A Basque delegation participated in the European Migrations Institution Forum in Riga, Estonia 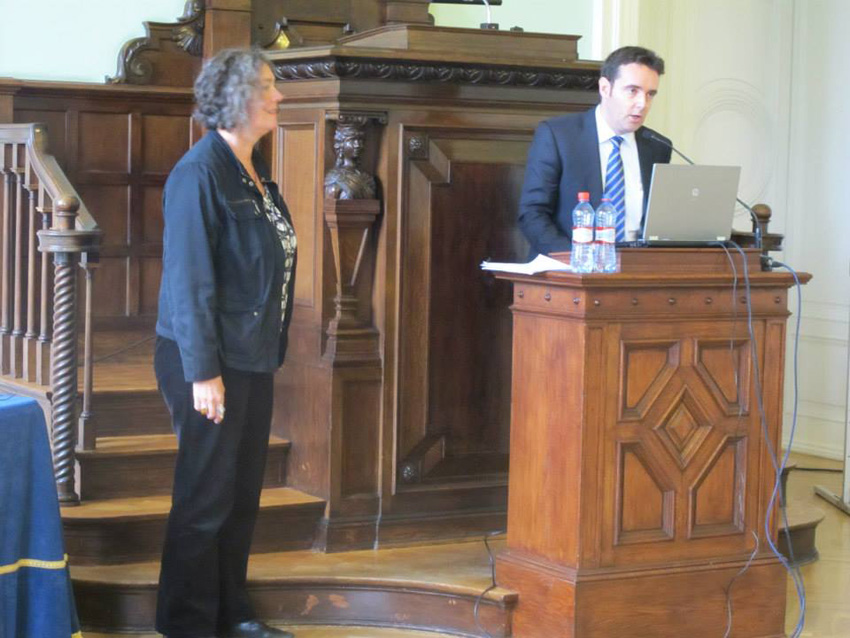 Asier Vallejo Itsaso presents the paper by Susana Sabin-Fernandez at the 2014 Conference of the AEMI in Riga, in September 2014 (photoBenanOregi)

The 2014 Conference of the Association of European Migration Institutions (AEMI) the main forum for the study of European migration throughout history, took place on September 25 in Riga, Latvia. The event was attended by a Basque delegation led by the Director of the Basque Community Abroad, Asier Vallejo Itsaso.  During the meeting the Basque group presented a paper by researchers Xabier Irujo (Associate Professor that the University of Nevada) and Susana Sabin-Fernandez (independent research from the UK) on Basque children of the Civil war entitled “Have to Little Basque Refugees.”

Riga, Latvia.  The Basque Government delegation that participated in the 2014 Conference of the AEMI included researcher Susana Sabin-Fernandez who was in charge of presenting a paper on the Basque children evacuated to the United Kingdom and other European countries, during the Spanish Civil War.  The research entitled, “Haven to Little Basque Refugees,” was carried out jointly by historian Xabier Irujo (Associate Professor that the University of Nevada), and Sabin-Fernandez an independent researcher in the UK.

The presentation took place on the second day of the conference, and was attended by Asier Vallejo Itsaso, Director for the Basque Community Abroad of the Basque Government, and technician Benan Oregi.  Susana Sabin-Fernandez was in charge of presenting the research.  She described the conference as “a very enriching experience.  At the professional level it was very stimulating to see how many people and institutions in different countries are working on the topic, and that AEMI is growing, that is to say, there is a lot of interest in it.”

The work presented by Sabin-Fernandez analyzes the evacuations of Basque refugee children to the UK and other European countries and the failed evacuation of the youngest to the US that never took place.  The researchers analyze the mechanisms and means of social pressure that took place in both countries, and the reason for its success and failure.