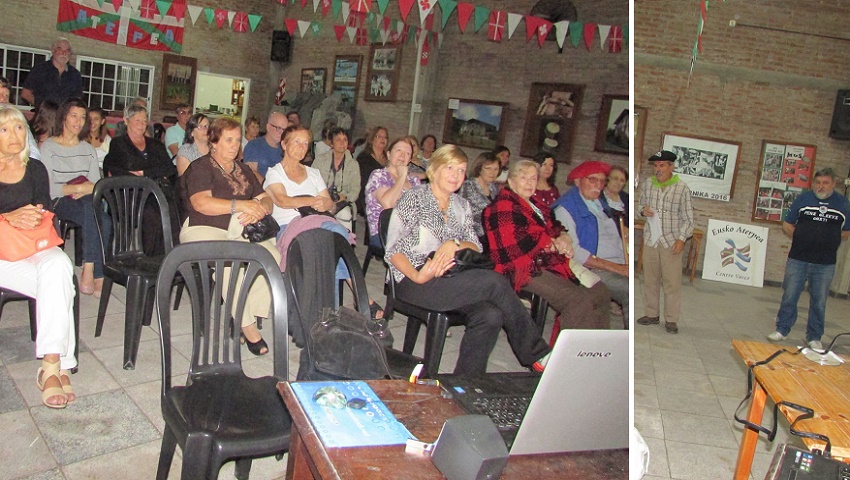 The Argentine Film Series at the Euskal Etxea in Gral. Rodriguez began with the projection of two shorts and then the film Amama.  Coordinated by Carlos Gabilondo, the event was very successful and attracted a large audience that didn’t only enjoy the film but also stayed and had dinner with their hosts.  The series will continue all year long interspersing Basque and Argentine films.

Gral. Rodriguez, Argentina.   The first event in the Film Series organized by the Eusko Aterpea Basque Club took place on March 11th.  This time, the film chosen by Carlos Gabilondo, coordinator of the traveling film exhibit, was the award-winning Amama that was very well-received by those present.

Raul Taretto, club president, told EuskalKultura.com that “they are very happy with the number of people who attended, as the numbers amply surpassed prior events.”  “What is certain is that there weren’t only people from Gral. Rodriquez in the audience, but there were also from the neighboring towns of Lujan and Pilar,” he said and added “the idea is to continue the series all year long interspersing films from the Basque Country as well as films from here.  This way, the next Basque film would take place in June.”

After the film, Gabilonodo provided a rich explanation about the film.  To thank Gabilondo for his contribution, club vice-president, Sandra Oliveira, presented him with a gift as well as to his companion and collaborator, Norma Carrizo.  After the event, guest and hosts alike had dinner together.

Collaboration on initiatives with former combatants

Eusko Aterpea also has a strong relationship with soldiers who fought in the Falklands, and so they have added initiatives that former soldiers are involved in in the community of Gral. Rodriguez.  During the month of March, the club participated in two of these.

On the one hand, club members and friends collected children’s Books and encyclopedias to be presented to a QOM native community located in the Impenetrable Chaqueño, 30 kilometers from Juan J. Castelli.  “All of the gathered material, ours as well as that from our neighbors in Mercedes, was taken by Oscar Poltronieri, himself a former soldier who was awarded the Hero’s Cross Medal of Valor in Combat,” Raul Taretto said.

On the other hand, the Euskal Etxea was also present at the inauguration of the Puerto Argentino, Malvinas, Public Library, a thematic library about the islands, founded by former soldier Carlos Montiel. The club accompanied Montiel at the inauguration of the library and presented a gift as well as books.  The Puerto Argentina, Malvinas Public Library is located on Saavedra 510, in Gral. Rodríguez.