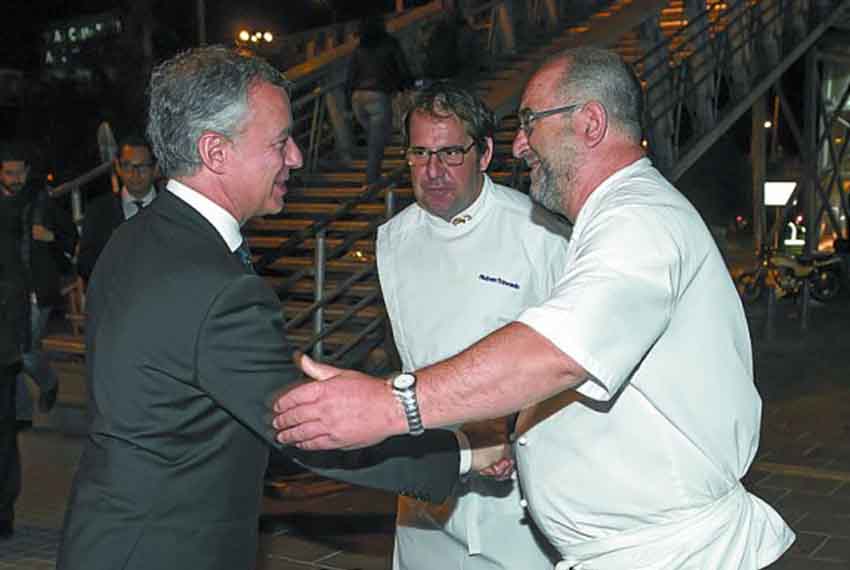 Having concluded his trip to Colombia, Lehendakari Urkullu refused to leave the rest of the expedition when their flight was nearly cancelled. Diplomatic success when President Santos joined a meeting with the Lehendakari and Colombia’s High Commissioner for Peace.  Urkullu also met with Basque businesses and the Basque community in the country. Outside of the program, Seratta, a restaurant in Bogota with Basque roots was also inaugurated. Article about the trip by Miguel Villameriel in El Diario Vasco.

Miguel Villameriel/Bogota, Colombia.  “We have no time to lose,” Iñigo Urkullu said in Bogota when involved in one event after another, hardly without a rest.  The Lehendakari’s official travel abroad usually include tight schedules, polar opposite of a pleasure trip.  In three full days, the Basque delegation led by Urkullu spent the week in Bogota, attending 15 official events as well as some additional ones that came up at the last minute, improvised that is characteristic of Colombian institutions.  After spending three days in Bogota, a city that they could only appreciate through a car window moving from one event to the other, the Lehendakari is already thinking about his trip to Quebec, Canada at the end of October..

In general, the trip to Colombia was as expected, despite being a country that requires extensive security measures after decades of armed conflict.  The only setback came on Friday afternoon, at the airport in Bogota when the Iberia flight that was to take the Basque delegation to Madrid suffered technical problems that risked canceling the flight.  It finally departed three hours late, but during the interim, the Spanish Embassy offered another flight to the Lehendakari, on another company, that Urkullu rejected.  ‘If we can’t go, I’ll wait with the rest of the group,” he said.  Two hours later they all left together.

Urkullu left Bogota with the sensation that the trip had been “very successful”  The main motive of this Basque Government’ delegation’s visit was to strengthen economic ties with Colombia and facilitate the arrival of new companies to a country that already hosts more Basque companies than many other South American countries, nearly 70. The anticipation of the Basque Executive, however, was that the peace process affecting Colombia increase the implementation of collective companies in the country.  The peace deal between the Colombian Government and the FARC was the second motive behind Urkullu’s visit “across the pond,” to lead the Basque delegation that also included the Minister of Economic Development, Arantxa Tapia.

The great success of this trip was also attributed to his being able to meet with the president of Colombia, Juan Manuel Santos, at the presidential palace.  This meeting was not scheduled, but was a welcomed surprise.  Urkullu stressed that “it’s not just a photo with Santos,” but a decission that the Colombian president made to join and take part in a meeting Urkullu had with Colombia’s High Commissioner for Peace, Sergio Jaramillo.  This showed that “Euskadi is an autonomous community, yes, but with its own uniqueness.”  “Such gestures allow Basques to feel proud that we are a major player in the world,” the Lehendakari said before leaving Colombia.

Let's explain that when representing an autonomous community, the Basque Government must manage all the institutional meetings through the Spanish Embassy in the corresponding country.  In that context, those responsible for organizing the official trip often complain that embassies do not usually afford Basque institutions many meetings at the highest level.  “We are sometimes happy that they don’t torpedo what we have worked months on,” they said. In the case of Colombia, the Embassy informed the Basque Government that President Santos was not foreseeing welcoming the Lehendakari on this trip.  Hence the importance of Santos surprising the lehendakari at his meeting with Jaramillo at the Presidential Palace.

The only event outside of protocol was the inauguration of a restaurant with Basque roots on Thursday night in Bogota.  Chefs Ruben Trincado (Mirador de Ulia Restaurant in Donostia) and Txato Etxaniz lead the kitchen of a modern restaurant that has just opened its doors in a shopping center in the middle of Bogota.  Trincado and Etxaniz accepted the offer to export Basque cooking to Colombia fused with local cooking, in a project that both are in charge of.  The Basque delegation was able to enjoy a tasty dinner at the opening of the Seratta Restaurant that relieved the tension of the three-days of heart attack in Bogota.