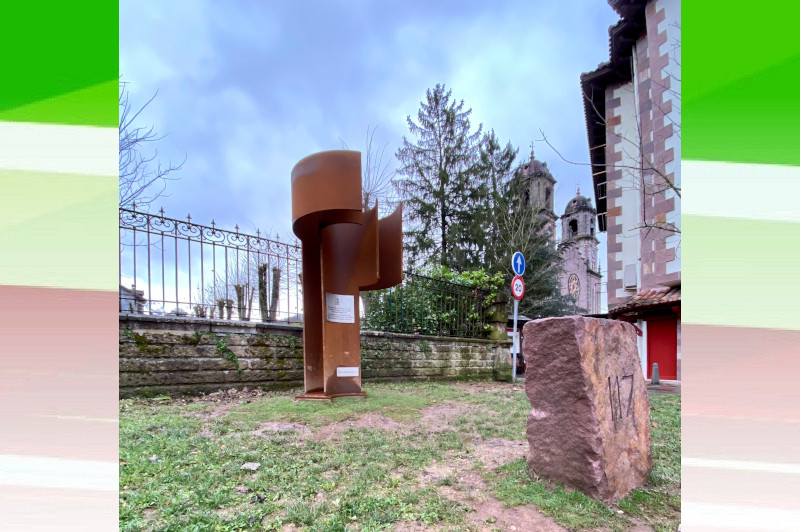 “Babesaren Muga – Border of Refuge,” work by Mikel Iriarte that was erected in 2020 in Elizondo as a point of memory

Elizondo, Navarre. A few months ago, the Navarrese Institute of Memory published the provisional census of Navarrese exiles, which gives an account of the Navarrese who, as a consequence of the military coup of 1936, had to go into exile.  To remember them and pay tribute to them all, the Government of Navarre, will hold an event next Sunday September 19th in Elizondo, as part of the program “Navarrese Exile. Exile, Memory and Art.”  The tribute will be at noon in the Foruen Plaza and Santiago Karrika 13, where a sculpture was inaugurated in December of 2020 as a point of memory.

The sculpture, which is called “Babesaren muga – Border of Refuge,” by Mikel Iriarte, is a tribute to the exiled who have been welcomed in a territory far from their origin and also recognizes those who offered protection and refuge to them, risking their own safety, and participated in the solidarity networks that helped them flee across the border.  As can be seen in the upper photo, it refers to number 117 to the border marker of the Berdaitz Pass, one of the most used crossings.

The Navarrese Institute of Memory, summons all family members and friends who are interested in participating in the event. Interested persons are encouraged to contact the organizers by emailing inm@navarra.es with “Tribute to Navarrese Exiles” in the subject.  Please indicate the number attending as well as information of the exiled relatives.  In this way, they will be able to receive the invitation and reserve their place.