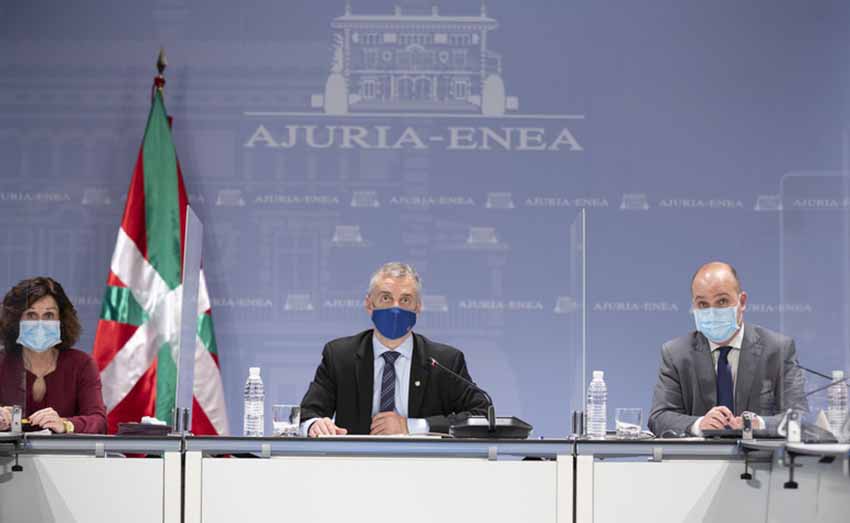 The head table at yesterday's meeting. Some of the members attended in person, while others did so virtually

Vitoria-Gasteiz. The Advisory Board of Basque Communities Abroad met yesterday at the Lehendakaritza, led by Lehendakari Iñigo Urkullu, accompanied at the head table by the Secretary General of Foreign Action, Marian Elorza, and the Director of the Basque Community Abroad, Gorka Alvarez Aranburu.  The meeting began with Urkullu welcoming everyone attending in person, as well as virtually, as in the case of the three Diaspora representatives, Arantxa Anitua (Argentina), Unai Lauzirika (Germany) and Jean Flesher (United States).

The Lehendakari opened the session where Marian Elorza provided attendees a summary of the last year that was greatly conditioned by COVID-19.  Gorka Alvarez Aranburu followed her. They described the situation as being tough and explained that the Government's contacts with the Euskal Etxeas have multiplied and virtual visits and meetings are held regularly.

At the beginning of the pandemic, a significant number of Basque citizens were served who were trapped by border closures.  Basque Government grants are in force.  Activities like the Basque Diaspora Archive continue their journey. The Dantza Munduan (online) program was also launched.  The third edition of the Basque Diaspora Day was also held adapted to the situation.

Basque club representatives, Unai Lauzirika, Arantxa Anitua and Jean Flesher also summarized the panorama that Basque clubs are facing around the world, providing testimony of the difficulties they have faced due to the pandemic, and some of the ways they have come up with to deal with these challenges.

Irene Larraza, Director of the Etxepare Basque Institute, explained the situation of Basque classes that the Institute supports all over the world, and their conversion to online classes, maintaining in person classes where possible, “always following the health protocols in place in each country.”

With the current conditions, it is not easy to plan activities, with a health situation that fluctuates and varies, and so Basque entities abroad have been opening and closing their doors according to their local restrictions, sheltering in place, or partial or total closures. Proposals were requested and some of those given so far have been mentioned before Lehendakari Urkullu concluded the meeting.