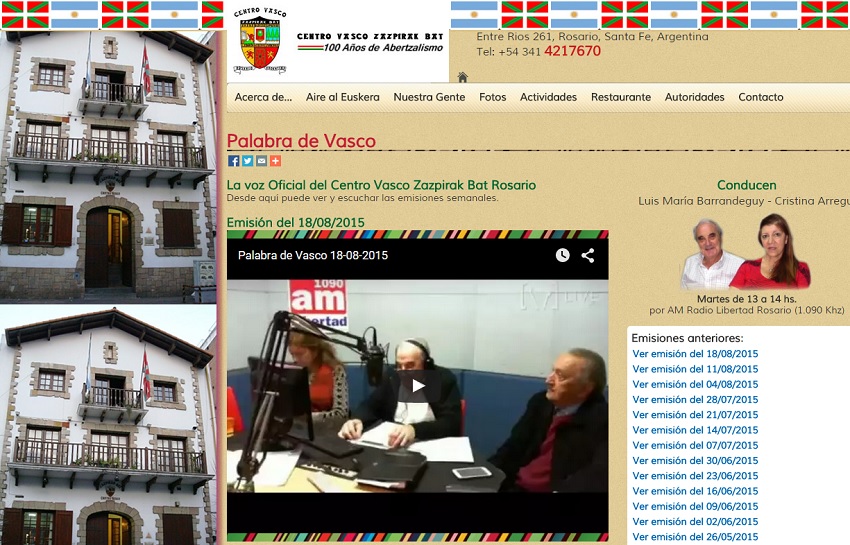 The radio program, “Palabra de Vasco” (Basque Word) began airing some 15 years ago, in mid-2002, in Rosario, Argentina.  Since then it has stayed the path, and continues to be broadcast today, not only for listeners in Rosario and the Province of Santa Fe and surrounding area, but also for anyone anywhere in the world wishing to follow their news, live as well as recorded.

Rosario, Argentina.  “Palabra de Vasco-Gora Euskal Herria” is broadcast on a weekly basis, live on Tuesdays from 13:00-14:00 on Radio Libertad in Rosario at 1090 KHz on the radio dial, and then repeated on Sundays at the same time.

Thanks to new technologies anyone in the world with an internet connection can also hear the program that is recognized as a speaker and teller of the thought and work done at the Zazpirak Bat Basque Club in Rosario: check www.zazpirakbat.com.  On the website, it is also possible to hear programs from 2012 to today.

The coordination and the presentation of “Euskaldun hitza-Gora Euskal Herria” is provided by Luis Maria Barrandeguy who is accompanied by Cristina Arregui.  Topics discussed include those relative to Basque culture and the Basque community in Rosario and Argentina, as well as in Euskal Herria and the Diaspora, all seasoned with Basque music.

Here is 2017’s first program that aired on January 3rd:

Led by Luis Maria Barrandeguy, “Palabra de Vasco” aims to promote the Basque culture and the activities carried out at Basque clubs in their Argentine surroundings.