Oaks, bertsos and dance at the “Basque Meadow,” in Mendoza to celebrate the 65th anniversary of Denak Bat 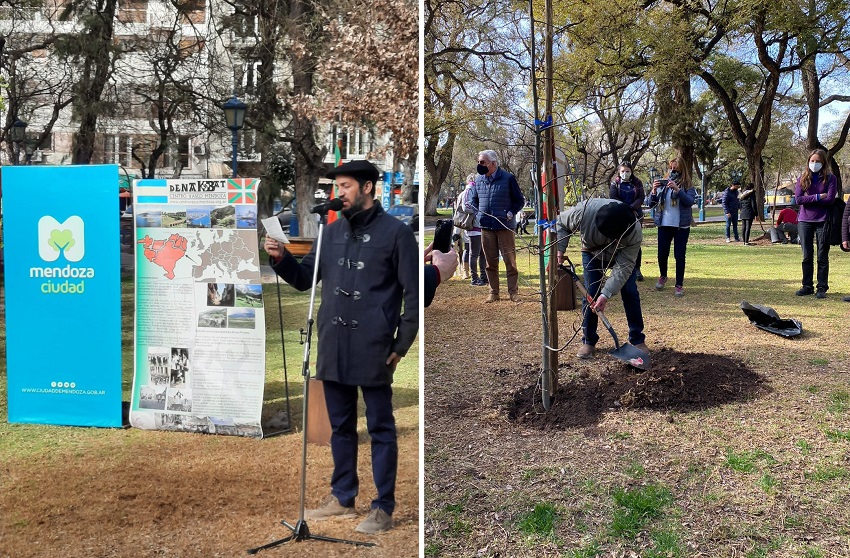 Mendoza, Argentina. The Basque club in Mendoza celebrated its 65th birthday with a cultural activity at the “Prado Vasco" (Basque Meadow) known as “Irauten” (holding on) located in the Independence Plaza.  The ceremony opened with a welcome by Nicolas Reinaga, Head of Coordination of the Area of Inclusion and accessibility of the Municipality of Mendoza, and continued with the history of the Basque club, by club treasurer, Pedro Salvarredi.

As a preamble to the planting of Basque oak saplings managed by the Green Spaces Directorate, Basque club president, Javier Salvarredi explained the importance of the oak in Basque culture to those gathered.  Afterwards, Bizkaian musician, Gotzon Batikon sang a Bertso composed expressly to celebrate the Basque Diaspora.

[Gotzon Batikon composed these bertsos in honor of the Basque Diaspora]

Your smile has drawn us
Our Basque homeland
Coloring so many kilometers
Leaving a mark in the two people.

Giving life from youth
To our grandparents' house
A small world among the immensity of the sea
A cry from the heart
Full of the future,
built with new strength.

After planting the saplings, the event closed with an Arin-Arin performed by dancers Javier Salvarredi and Carla Martínez Báez, accompanied by Batikon on the Trikitixa.

[Euskal Dantzak at the Basque Prado in Independence Plaza]

The event was deemed “Linking Communities,” as part of the “Month of Solidarity” organized by the City of Mendoza.