From the youngest ones to the most veteran members, everybody enjoyed the first 'Ihauteriak' in Montreal (Photo: E.Q.)

This past Sunday, February the 21st, Basques from the east coast of Canada celebrated 'Inauteriak,' or the Basques carnivals, for the first time. Around 40 people gathered at the event geared towards children “from 3 to 86,” as the event's flyers read. “These types of events are important to keep the culture alive through the generations,” Sylvie Nadaud, organizer, told EuskalKultura.com 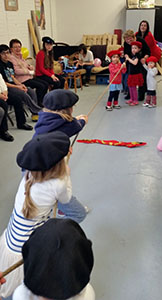 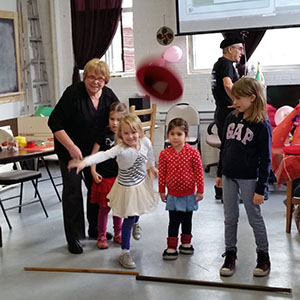 "The goal of our Club in Montreal is to share our culture and traditions, and to build a link between Canada and the Basque Country,” explained Nadaud. With that main goal in mind, organizers prepared some arts and crafts activities, like decorating Joaldunak hats -one of the main Basque carnival characters; you can see the hats in the picture above-; organized sport-games like txapela throwing and soka tira (tug of war); had the children sing songs; told them the story of the Joaldunak and Zanpantzarrak, who even made an appearance. To finish with, everybody had some crêpes with maple syrup.

The importance of keeping the culture alive

Nadaud says that “most of the children in the Club are grand-children of our oldest members. They’ve grown up in North America and, often, have lost the connection with their Basque roots. That’s why these types of events are important, to keep the culture alive through the generations.”

The first Inauteriak was a successful event that around 40 members enjoyed, of which eight were infants. "It's not bad for the first time." In the words of the organizer, depending on the plan, the Club's programs gather between 30 and 50 members, and around 12 children.