Ekin Kultur Taldea will hold a “Dantza Plazan,” next Saturday in Pergamino along with Lagun Onak 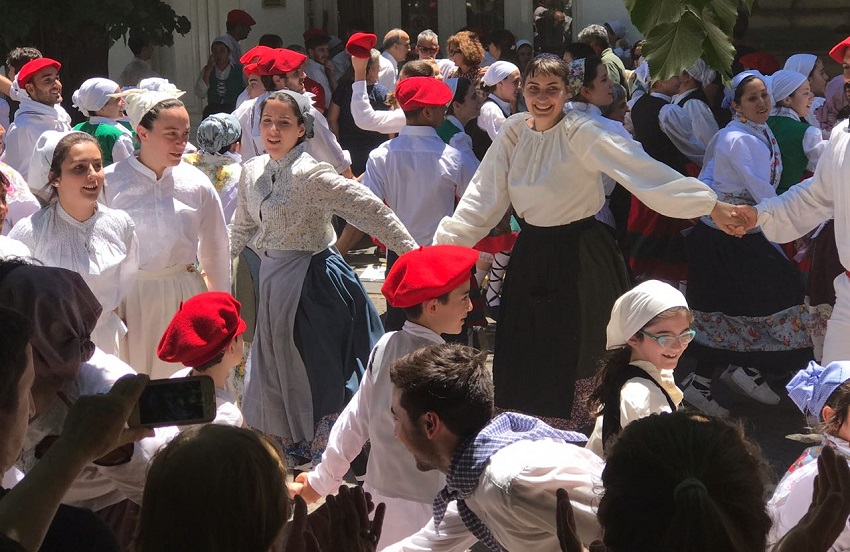 The group led by Aitor Alava currently doesn’t have its own locale.  This isn’t a huge obstacle however, because in the words of the director, “some rooms, parks and plazas are the perfect places to continue dancing.”  After Dantza Plazan in Pergamino, the group will begin rehearsing in April at the Cultural Center “Las mil y un Artes,” in Buenos Aires.

Buenos Aires, Argentina.   Faithful to its style of organizing activities along with Basque clubs in the interior, the Ekin Kultur Taldea group, along with Lagun Onak in Pergamino, invite everyone to “Dantza Plazan,” an activity whose goals is to bring the world of folklore and popular Basque music beyond the Basque community’s borders, doing typical dances and traditional dance in an urban ambience, specifically in a public plaza, with Basque and non Basque performers.  This first 2018 "Dantza Plazan" event is set for March 17th at 5pm, in the Plaza 25 of May in Pergamino.  There dantzaris from Ekin Kultur Taldea and those from the local club’s Goizeko Izarra Basque dance group will teach the public the basic steps of the best-known Basque dances. Afterwards the club will provide dinner at the clubhouse.

The collaboration between the group led by Aitor Alava and the Basque clubs in the interior isn’t limited to sporadic activity.  In the case of Igaraba Dantza Taldea in San Nicolas, Ekin Kultur Taldea didn’t only contribute to its constitution, but also to its technical training.  Over the coming weeks and for the third year in a row the group will also resume rehearsals, again thanks to the dancer from Alava.

Rehearsals for the Ekin Kultur Taldea will also resume shortly.  After steps to find a place, the group will again gather in April on Saturdays from 2:30-5:30 at the Cultural Center Las Mil y un Artes, located on Medrano 645 in Buenos Aires.  Anyone wishing to join them should email: ekindantzaritaldea@gmail.com.

Last year was without a doubt one of inflection for the Ekin Dantzari Taldea since its disassociation with its partner institutions and headquarters, Eusko Kultur Etxea and Ekin argitaletxea.  In this context it had to redefine itself and under the name Ekin Kultur Taldea it presented to the community as “a group comprised of youth and adults who participate as dantzaris, Basque students and teachers, or simply as friends and lovers of the Basque culture whose goal was to support and divulge it in all area.”

According to its founder, Aitor Alava, “Ekin Kultur Taldea seeks to become a bridge between the Basque Country and Argentina through the diffusion, instruction and practice of Euskera, considering it as an element and reference of the Basque culture, as well as Basque dance and folklore in general as it is the original reason for the group.”

“Ekin, as an independent association was formed in 2017 and hopes to continue being part of the large Basque family in Argentina that it has never left, or ceased helping to consolidate.  And even if it doesn’t have its own locale, this isn’t an impediment to continue working with joy, effort and camaraderie.”

“That is how we began down this road, without costumes a with no place to practice, with a large load of libel and slander that instead of weakening it made it a stronger group that is even more so today.” This group rehearses every Saturday afternoon, as they did when part of the Basque club who decided one day to dispense of them, and the Basque students and teachers continue their classes and regular meetings in hopes to continue learning," the dantzari said.

Anyone wishing to join the group, or learn more about it can email them or contact them through Facebook: Ekin Kultur Taldea– or through its Blog.