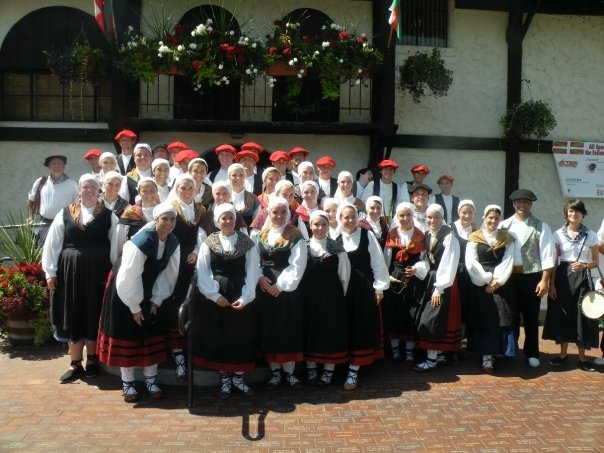 Boise Basque dancing group, the Oinkaris, and local Basque music band, Amuma Says No, are spending their last days in Boise getting ready for their much-anticipated trip to the Basque Country. They will spend nine days visiting several Basque cities, where they will be giving performances and meeting with local Basque dancing groups. This trip is crucial for maintaining the authenticity of the group’s repertoire, as well as forming and maintaining connections with native Basque dance groups. The Oinkaris will arrive in Bilbao on July 2, where they will stay for the first 5 days. They will then travel to Donostia for the next 4. On July 11 the group will head back to the United States.

Boise, USA. The Oinkaris, the Basque dancing group from Boise, Idaho, is getting ready for its upcoming trip to the Basque Country on July 2. The Boisean Basque dancers will be accompanied by Boisean local Basque band, Amuma Says No, and together they will tour several cities, including Bilbao, Donostia-San Sebastian, Pamplona-Iruña and Vitoria-Gasteiz, giving performances and learning new dances from a number of local Basque dancing groups.

This will be the 5th trip the Oinkaris have taken to the Basque Country. The original group went in 1960, again in 1985 to celebrate their 25th anniversary, and then again in 2003, invited by Arkaitz, and in 2006, invited by Andra Mari. The group is going on its own this time. In order to help members of the group pay for the tour expenses, the Oinkaris embarked last January on a 6-month fundraising campaign.

“Our fundraising efforts were very successful. We had a 24-hour Dance-A-Thon, put on a Sagardotegi, served breakfast at Applebee’s two weekends, and had a garage sale”, Tyler Smith, president of the group, tells EuskalKultura.com.

The Oinkaris are excited to take this opportunity not only to learn from native Basque dancing groups, but also to showcase what they have to offer in their unique place as American-Basques traveling back to the homeland.

Here are the dates and the cities the group will be visiting:

-2 July. The group will arrive in Bilbao
-3 July. Galdakao, to spend the day with the Andra Mari dance group. Amuma Says No will perform
-4 July. Oñati, to have lunch with Onatz Dance Group. Then go to Mungia and perform with Andra Mari
-5 July. Pamplona all day to meet dance group Ortzadar and perform with ASN. Then the group will go to a Sagardotegi
-6 July. Gernika, to perform
-7 July. Lesaka for San Fermin, no performance
-8 July. Vitoria-Gasteiz, to perform for the government
-9 July. Hendaia, to spend the day with Mutxiko (group that performed during Jaialdi 2010)
-10 Jul.- Anorga, to perform with Arkaitz (group who came to Jaialdi 1995 and 2000).
-11 July- Heading back to the States.