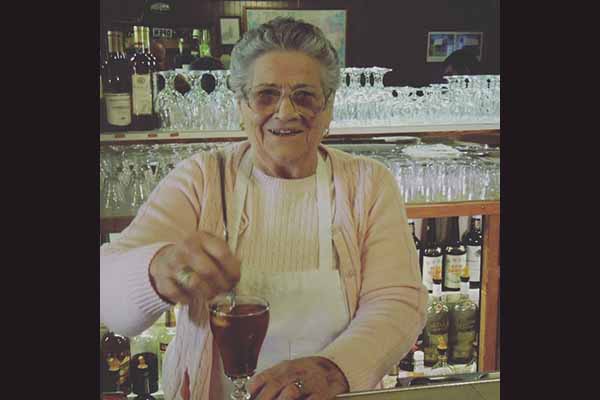 It is with deep sadness that we announce the passing of Elvira Cenoz on October 30, 2019.

Elvira was born in Saturraran, Motrico, Spain on April 6, 1931. Her parents were Doroteo Diaz de Mendibil and Maria Osa. She arrived in Susanville, California on August 10, 1971. In 1972, Elvira went to Alturas, California to work for her sister Josephine and brother-in-law Fernand Larranaga as they had just purchased the Brass Rail, a Basque restaurant.

She worked in Alturas for 8 years until she married her husband, Eusebio, on June 11, 1980 and moved to Gardnerville to help run the Overland Hotel Basque Restaurant, which was owned by her husband. Eusebio ran the bar and Elvira cooked. They continued to work the Overland together until the death of her husband on June 17, 1989, at which time Elvira operated the Overland by herself until 2015 when she retired.

From the time Mendiko Euskaldun Cluba first began she was always very supportive of the Club. In the early years, she helped with cooking for the picnics.

She loved the children and couldn’t do enough for the dancers. Many of the dancers fondly remember the rich hot chocolate and churros she would make for them after a cold night of Christmas caroling.

We also remember the beautiful Easter feast she would prepare that was so delicious.

We all have many wonderful memories of Elvira at the Overland.

She will truly be missed. Elvira is survived by her nephews Fernand and Rene Larranaga and their families who live in Alturas.

She is preceded in death by her parents and brother in Spain and her sister Josephine in Alturas.

Funeral services will be held on Saturday, November 9, 2019 at St. Gall’s Catholic Church. Rosary at 10:30 a.m. and the funeral mass at 11:00 a.m. with interment immediately following at Gardnerville Cemetery, Gardnerville, NV.