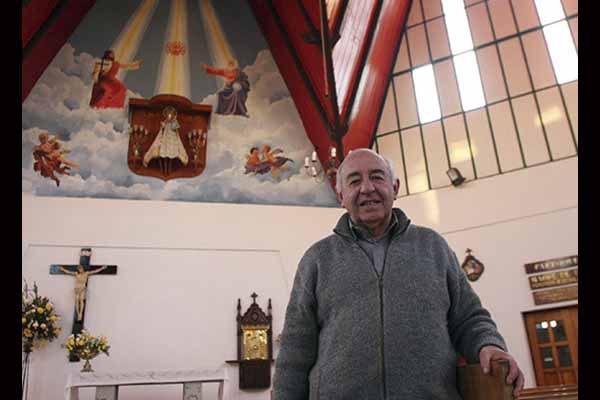 Lines by Eusko Etxea of Viña-Valparaíso on the death of aita Kepa Bilbao:

With deep sorrow we communicate the death of our beloved and great friend: Victim of a complicated illness, our beloved Father Kepa Bilbao Laca died tonight in the Reñaca Clinic.

He will be remembered by all of us for his tireless work to the neighbor, selfless help to the most dispossessed, inexhaustible struggle for education. Also for spreading and keeping alive the Basque traditions and culture in Chile.

Those of us who had the pleasure and honor of knowing him are very grateful for his beautiful work and valuable contribution to our Euzko Etxea of Viña Del Mar Valparaíso. Leaving a precious legacy, that as a Basque club we will keep going on.

Kepa Bilbao Laca, was born in the Basque city of Bilbao, son of Don José María and Doña Petra; the rest of his family consisted of nine brothers, seven men, and two women (twins).

When he was eleven years old he tried to enter the diocesan seminary and he could not, he tried again at age thirteen, with no success in both cases due to lack of financial means, it was a post-war period, very difficult and the seminar was paid.

He was ordained a priest on July 15, 1963 in the Jesuits of Bilbao. His first Mass was held on July 16, 1963, the day of Carmen, in the Convent of the Discalced Carmelites of Bilbao.

Father Kepa will be transferred to the City of Quillota, San Martín de Tours Parish, where from 10 am on Friday, he will be veiled, then at 4:00 pm a farewell mass will be held and he will be taken back to Viña del Mar to the educational foundation he gave life to. Finally, he will be buried on Saturday in the Parque del Mar de Concón cemetery.

The president of Eusko Etxea de Viña-Valparaíso wrote these lines about aita Kepa:

It's been almost 10 years since I first arrived in Chile. I have met many people during this time, but there is one person that I would mention more than anyone else, Kepa. He has spent his whole life helping the Chileans who needed it most and spreading the Basque identity and culture in this country. If we have to define how we Basques are, kepa is the answer. Today he has died but it is up to us to continue working to improve Chile and the Basque Country.