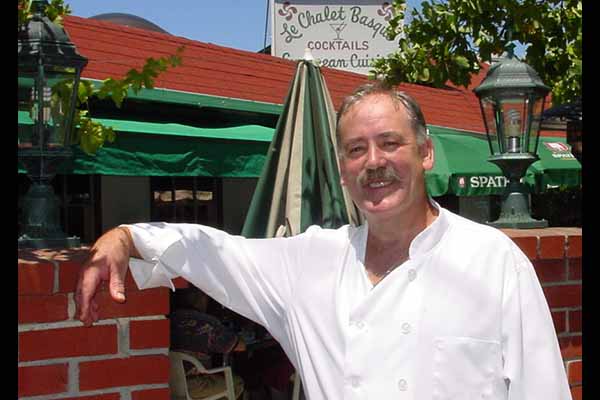 He founded and was chef and owner of the Gernika restaurant in Sausalito, and later he owned and run the Chalet Basque in San Rafael.

Born 71 years ago in the Basque town of Irisarri, Roger Minhondo lived in Novato, California. He founded the Guernica restaurant in Sausalito, California and after leading it to success, he would acquire, over the years, the Chalet Basque restaurant in San Rafael, the establishment where he worked when just emigrated from the Basque Country. He was a member of the Board of Directors of the Basque Cultural Center in South San Francisco, being the director of its Catering Commission for more than 36 years. Precisely in recognition of his work on behalf of the Basque community and the Gure Euskal Etxea-BCC Basque Cultural Center, this Basque-Californian institution awarded him in 2010 its Bizi Emankorra Prize, which recognizes the trajectory of a lifetime support to the Basque culture and community in California and the US.

One of his friends in irisarri sent us these lines:

Roger Minhondo was born in the Indartenea house in Irisarri (Lower Navarre) in 1949. He studied at the Biarritz School of Cuisine and moved to Paris as a young man to work as a cook at the Hilton Hotel.

But, like many others, he had the worm to see the world and he was wondering between traveling to California or Australia. Finally, in 1969, at age 20, he decided for California.

Young, happy, strong and hard-working, he soon found a job at the Châlet Basque restaurant, in San Rafael, run by Raymond and Eugenie Coscarat.

Dynamic person and always ready to learn and move forward, he had an experience with a partner in the Normandy restaurant, after which he launched into his own project and business, opening the Guernica restaurant in the tourist town of Sausalito.

In the year 2000, making good that of "new millennium, new fase", he acquired the Chalet Basque in San Rafael, the same one in which he took his first steps in the United States, keeping the same name, but adding his cuisine and imprint .

5 years ago, when his illness worsened, his son Patrick took over the restaurant.

He was married to Christine Heaney, they had three children: Pierre (Jasmine); David (Jackie), Evie's parents; and Patrick (Kasha).

A very sociable person, Roger has been part of the Gure Euskal Etxea-BCC Basque Cultural Center in San Francisco since its inception and throughout all his time he constantly helped and collaborated with this institution, a meeting point for Basques in the San Francisco Bay Area. Just a few days ago and given the current general situation, he expressed to his surroundings his concern and ideas for the future of that house.

Roger was very fond of his Basque heritage, lover of his family, of the house he was born in, proud of Irisarri and Euskal Herria, very loving to share Basque songs in his encounters with his closest circle.

Unfortunately, at 71 years of age, a merciless disease has taken him, when he still had so much to do and to give.

Send to a friend
4