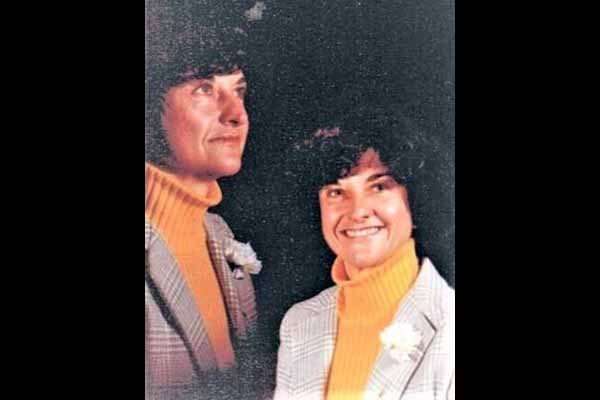 Theresa was born in 1933 to Basque parents Antonio and Carmen Naveran of Battle Mountain, Nevada.

She attended Battle Mountain Grammar School and exhibited a fiery independence on her first day of school, requiring the Basque remedy of "hot water and whiskey" to convince her that first grade was a beneficial thing. From that moment onward, she excelled in all of her classes, learning long division by the age of six and gaining infamy as the Wicked Witch of the West in the sixth grade play. As an eighth grader she was a member of the "Shorthorns" - the cheerleading team for the Lander County High School "Longhorns" and graduated from LCHS in 1951.

Theresa spent her teenage summers working for the Nevada Bank of Commerce and almost joined the bank staff after graduation. Finishing second in the state-wide speech competition however had given her a new confidence. Encouraged by her English teacher, she enrolled at Sacramento State in 1951 and then transferred to the University of Nevada, Reno in 1952.Through a combination of scholarships, working part-time and with the help of her sister and extended Basque family, she was able to graduate in 1956 with a Bachelor of Arts degree. She often remarked that the UNR years were some of the most memorable and she made lifelong friends during that period.

Theresa married and started her family upon graduating from UNR. She was a dedicated mother and with four children to raise that required an abundance of love! As a young mother, countless hours were spent reading Winnie the Pooh stories and playing games of Go Fish and Yahtzee. And as her children grew she introduced them to sports and music. In the winter they were shipped off to Sky Tavern for ski lessons while the summer was reserved for taking swimming lessons at the Carson Pool. Music lessons were mandatory all year round. Later in life she explained the reason for introducing so many activities: as a first-generation American, she had only dreamt of such opportunities.

After 20 years of raising kids, Theresa returned to UNR in 1978 to complete her Masters in Psychology. This led to a new career with the Douglas County School District and in 1982 she joined the counseling faculty at Douglas High School. The counselors at DHS were a young, adventurous bunch and before she knew it she had learned to swim, scuba dive, ski, and also learned about a Basque drink called the Picon Punch. She once quipped that it was the power of the Picon Punch that finally helped her overcome those first-generation American jitters!

Theresa retired in 1998 to concentrate on her grandchildren. She was as dedicated a grandmother as she was a mother and approached her grandkids with unconditional love. Her final hope was that they develop the same sense of fiery independence that had guided her through life.

By her request, Theresa wished that there be no service. In her memory a scholarship fund has been established at her beloved Douglas High School. Donations are welcome and will be received at:

(published in the Reno Journal-Gazette and Mason Valley News, Legacy.com from May 24 to May 28, 2021)