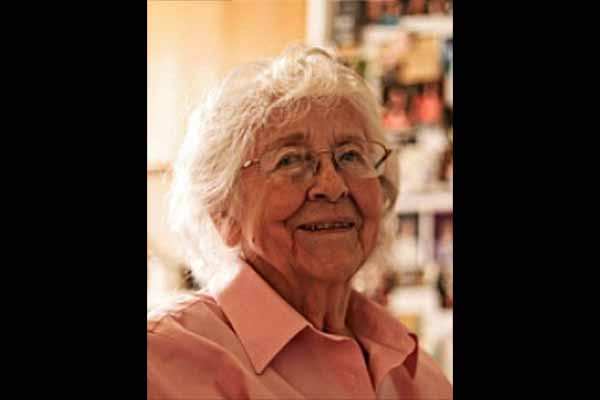 Graveside funeral services for Gladys Esponda, 91 year old Buffalo resident who passed away early Sunday morning will be held Tuesday December 21st at 10:00 a.m. in Willow Grove Cemetery with Father Pete Johnson officiating. A Vigil Service will be held and the Rosary recited on Monday the 20th, at 6:00 p.m. at St. John the Baptist Catholic Church in Buffalo. Donations in Gladys’ memory may be made to the Johnson County Stock Growers Association in care of the Harness Funeral Home at 351 N. Adams in Buffalo. Online condolences may be made at www.harnessfuneralhome.com

Gladys Margorie Esponda was born on July 26, 1930 in Leiter, Wyoming to Earl and Christina Jacobs. She grew up in Leiter and went to school in Leiter, Clearmont and Arvada. She graduated from Clearmont High School with the class of 1949. After high school she worked at various jobs in the Sheridan area. She lived in Worland, Wyoming for several years where she was a telephone operator. She was among the first operators when phones were installed at Yellowstone Park. She met her future husband in phone conversations while he was buying wool. She was married to the wool buyer and rancher John Arthur Esponda on August 11, 1959 in Buffalo and they made their home and raised a family on the family ranch in Buffalo. Her husband Art died suddenly in February of 1972 and Gladys continued to live, ranch and raise the family until her death.

She is survived by three sons, Johnny Esponda and his wife Madonna, Steve Esponda and his wife Patsy and Mitch Esponda all of Buffalo; one daughter Tamara Van Landingham and her husband Jerry of Chandler, Arizona; ten grandchildren; thirteen great-grandchildren and numerous nieces, nephews and God Children. She was preceded in death by her husband, two brothers, two sisters, one infant son and one daughter-in-law.