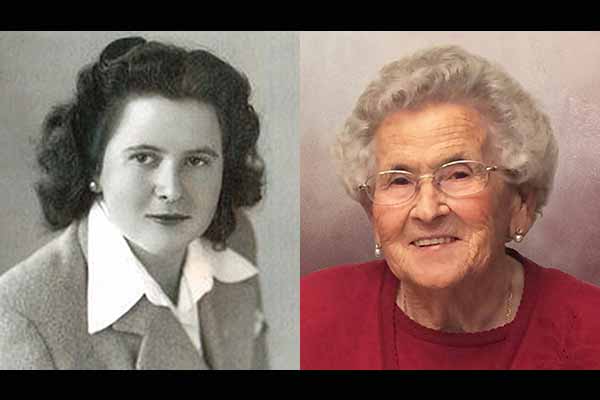 Francisca, the fifth of seven daughters, was born on October 10, 1927 in Gabika, Bizkaia, Spain to Marcelo Hormaechea and Segunda Aldamiz. Along with her sisters, Francisca experienced hardship and perseverance through the Spanish Civil War. At nine years old, Francisca witnessed the bombing raid on nearby Gernika first hand as her family watched the planes from their baserri (farm). The war caused people to go hungry as the army took food and livestock; this forced many families to hide food for survival.

At the age of eleven, Francisca worked as a live-in maid to a family in Kortezubi for six years before moving to a similar job in Gernika. While working in Gernika, she began taking sewing classes with a group of women who became lifelong friends-many of those friends later immigrated to Idaho as well.

In 1949, while in Gernika, Francisca missed her ride home when her cousin and his friend, John Lejardi, saw her and offered to take her in a taxi. Although Francisca knew many members of the Lejardi family living in nearby Ereno, this was the first time she met the oldest sibling recently returned from the United States.

On June 2nd, 1951, John and Francisca were married, and in November they began their journey by ship to the United States. Francisca often recalled how sick she felt on the arduous trip overseas during which terrible weather pushed them back from their destination. Ship all but destroyed and hope of a safe arrival fleeting, she finally saw the lights of New York with a grateful heart. Once in New York, they made their way by train to Boise, Idaho.

John and Francisca began farming together in Marsing, Idaho. In 1962, they purchased a farm in Homedale, Idaho and moved there in 1972. Francisca often worked side by side with John, and together they raised their four children Maria Teresa, John, Elizabeth, and Esteban. With the help of her children, she studied and became a naturalized American citizen in 1963.

Francisca was a charter member of Euskaldunak. She was also a member of La Organización Independiente Social, St. Hubert's Altar Society, Txoko Ona, and the Basque Museum. Francisca never forgot how it felt to have little and miss family, so she made sure she took care of others who were new to the country or needed assistance. Her care for others was constant, selfless, and discrete. She especially cared for John as he battled Alzheimers for several years. She also raised and loved all of her grandchildren with kontuak (talks), scrambled eggs, and cookies at her kitchen counter, and dollar bills, Life Savers, and Hersey bars from her purse. Her presence, interest, council, and love for her family never waivered.

Francisca is survived by her youngest sister, Tomasa; her sister-in-law, Julia; her children, Teresa, John (Gloria), Elizabeth, Esteban (Margaret); her grandchildren; great-grandchildren; and numerous nieces and nephews both in Euskadi and Australia. She was preceded in death by her husband, John; parents, Marcelo and Segunda; sisters, Maria Louisa, Felisa, Primitiva, Avelina, and Irene; son-in-law, Juan Mari Mendazona; and great-grandson, John Arana.

A rosary will be held in her honor at 9:45 am on Thursday, February 18th at Our Lady of the Valley Catholic Church in Caldwell, Idaho. A funeral mass will take place after at 10:30 am with interment following at the Marsing-Homedale Cemetery. Due to the pandemic, there will not be a reception. All are welcome at the funeral and interment; however, the family understands many may not be able to attend.

Memorials can be made to the Euskaldunak Basque Club, the Txoko Ona Basque Club, the Basque Museum, or any charity close to your heart. Condolences can be given at www.flahifffuneralchapel.com