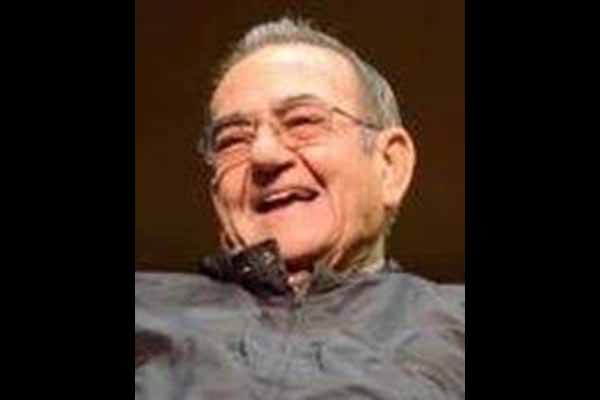 Anthony John Villanueva, 86, of Meridian, died Monday, April 4th, 2022 in the presence of his beloved wife and children. He spent the day surrounded by his family and being showered with love.

Anthony, "Tony", as he was called, was born November 12, 1935 at St. Al's in Boise, Idaho. He was the sole treasured child of Marie Teresa Lopez Villanueva and Jose Villanueva. He spent his youth growing up in Emmett which became his heart. He loved everything about Emmett from his first days to his last. Tony grew up Basque dancing and playing music for Basque festivals, being an altar boy at the Catholic Church and playing sports every single chance he got. He met so many dear friends through his school years in Emmett, friends he kept until his dying day. Nothing made him happier than being on the football field, basketball court, baseball diamond or hanging out with all his buddies at their family owned President Cafe. High school is where he began dating the love of his life, Sharon Lee Brubaker, the beautiful cheerleader who became his lifelong partner. Tony and Sharon graduated from Emmett High School in 1954 and became husband and wife in a double ceremony alongside Sharon's sister, Shirley and husband, Ed on September 10, 1954. That union lasted 67+ years on this earth and will continue into eternity.

Once the wedding ceremony was concluded, Tony had to rush over to The College of Idaho to get to football practice. As a three sport collegiate athlete, he played football, basketball and baseball for The C of I from 1954-1957 having teammates such as Elgin Baylor and RC Owens. When not at practice, at a game, with his lovely wife, or at the Wednesday Night Wonders Naval Reserves which he was in from 1953-1955, he also attended classes. He was not to get a degree from C of I though as one day while visiting family in Emmett, Ken Carberry stopped him to ask him to come teach in Emmett on an emergency certificate as they were in need of teachers. That fine man, Mr. Carberry, changed the course of Tony's future as he found his true calling as a teacher and coach within the education system in Emmett. It became a passion that affected the lives of thousands in a way that is truly immeasurable as Tony was so much more than an educator, coach, mentor or friend to his students, he was their support and fan for life!

Once the emergency certificate ran out in 1963, Tony went to the University of Nevada, Reno to secure his degree in the field of education. By this time, he and Sharon had 3 children, Tony Jr., Angela, and Teresa. They loaded up their family and moved to Reno where he worked at Harrah's Casino and attended classes to complete his degree which he did in 1964.

Tony then moved his family back to Idaho where he taught in Payette one year and then at Fairmont Jr. High in Boise for one year, before landing in Athena, Oregon in 1966. This part of Tony and Sharon's life is some of their happiest times. He coached football, basketball and baseball in Athena. They met lifelong friends, they welcomed their fourth child, Michelle, and watched their eldest graduate from high school. Tony taught Spanish in Athena taking students to Mexico on different occasions, all of which have great stories. He completed his master's degree through Linfield College and took courses at the University of Mexico. He soon became principal. Tony was inducted into the Coaching Hall of Fame in Oregon for all the success he had as a coach in Athena. Tony and Sharon remained in Athena until 1974 when an opportunity to become superintendent took the family to Moro, Oregon from 1974-1976. Tony enjoyed this new challenge but health concerns with Tony and Sharon's parents lead them back home to Emmett in 1976 after graduating their daughter, Angela.

Tony became the vice-principal for Emmett High School wanting to get back to working more directly with kids. He loved the students he worked with and each student he worked with knew it. He was affectionately known as Mr. V. He absolutely loved being back home in Emmett. He served the Emmett community as vice-principal from 1976-1995 seeing his daughters, Teresa and Michelle along with his first born grandson, Michael, graduate as Huskies just as he had back in 1954. He left his mark on the community of Emmett and Emmett was forever a part of him. He was able to reconnect with his life-long friends and be close to his family.

Tony went on to serve his community further upon retirement as a City Councilman. He also wrote sports columns for the Messenger Index and often would stretch the story a bit by weaving his humor and whit through his stories. Tony "retired" from working, but promptly went to work being the daily influence and factor in the lives of his family. He was literally involved in every moment of their lives. He truly lived for them, their success and their moments. He spent the rest of his free time, staying connected to his high school and life-long friends with a weekly lunch that was so special to all of them. He and Sharon moved to Meridian in 2010. Tony continued his connections with his friends and made many new ones, he literally never met anyone that he didn't try to get to know or connect with.

Tony was preceded in death by his parents, Jose and Marie, and his uncle, John Lopez.

A viewing will be held from 5:00 – 8:00 PM at the Potter Funeral Chapel on Thursday, April 14, 2022. Tony's Celebration of Life will take place at the Emmett High School Gymnasium on Saturday, April 16 at 2:00 PM with a 50's style reception to follow. Please join us in fulfilling Tony's wish and wear your favorite school or sport's team attire.
If you are unable to attend, the Celebration will be livestreamed on Anthony Villanueva's obituary page at www.potterchapel.com.

In lieu of flowers, please donate to the Emmett Public Schools Foundation at the Emmett School District Office, 119 North Wardell, Emmett, Idaho 83617. We are establishing a scholarship in Tony's name to benefit future Huskie graduates.