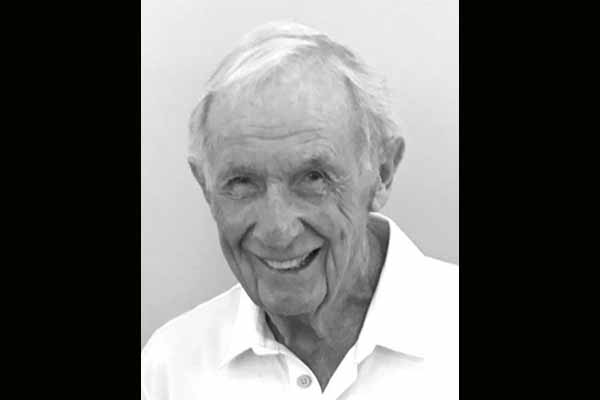 Pierre Hualde passed away peacefully at home on February 27, 2020, surrounded by his loving wife and family.

He was born in Ogden to Basque immigrants Pedro Hualde and Marguerite Jaureguito Mathieu, hard-working and devoted parents who passed those values on to their children. Pierre was a loving father and a man of great integrity.

Pierre graduated from Weber High School in 1945 and went on to earn a degree in Business Administration from the University of Utah. He served two tours in the military, joining the Marines after graduating high school, and later enlisting in the Army.

Pierre married Nancy Nye on November 7, 1952 and together they raised four beloved daughters. Nancy passed away unexpectedly on September 9th, 1981. In 1989 he married longtime friend Olive Danzer, with whom he enjoyed 31 wonderful years.
Pierre spent his entire life devoted to the game of golf. He started at age 12, as a caddie at Ogden Golf and Country Club, and continued to work in the profession until the time of his death. During his college years, he played for Weber State before transferring to the University of Utah, becoming a member of the University's first golf team.

In 1962 Pierre was chosen to be the head professional of Davis County's first public golf course. Pierre designed and supervised the construction of Davis Park Golf Course, which opened in 1963. Pierre's dedication and hard work created what continues to be one of the most successful and popular courses in Northern Utah. He served as head professional at Davis Park until 1992 and continued working there as an assistant until the time of his passing -- a total of 58 years of service.

Pierre was a lifetime member of the PGA of America. He helped launch the careers of several successful PGA Professionals, including Scott Whittaker, Ken Pettingill, and Brad Stone. He has been a mentor to many other young professionals who began their careers at Davis Park, including Dustin Volk, Shawn Edwards, Zach Johnson, Pete Stone, and Taylor Laybourne. Pierre will always be remembered for his kindness, generosity and support.

A gathering will be held on Wednesday, March 4, 2020 from 6 to 8 p.m. at Lindquist's Layton Mortuary, 1867 North Fairfield Rd. Interment, Lindquist's Washington Heights Memorial Park, 4500 Washington Blvd. to be held at a later date.

A special thanks to Kirk and Leslie Danzer for the care and support they provided during Pierre's final days.

In lieu of flowers please consider donating to the charity of your choice .

Condolences may be shared at: www.lindquistmortuary.com.