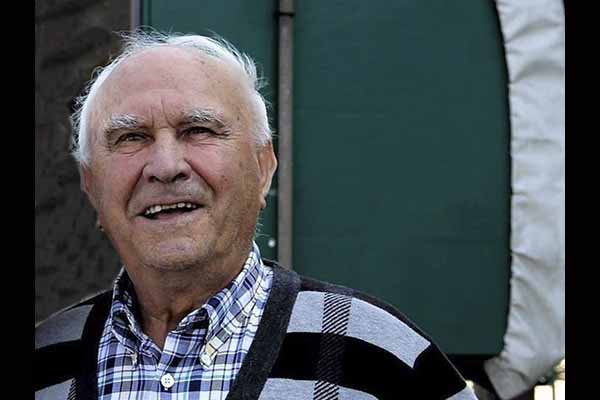 Pierre Ausquy was born in Arneguy, France and immigrated to the U.S. in 1947 where his American dream was fulfilled. A sheepherder, gardener, and business owner, Dad was a well known member of many Basque and French clubs in the San Francisco Bay Area. Nothing gave him more pleasure than being surrounded by his friends and family, especially if they were playing cards.

Over the years, he sorely missed his friends who had passed and our pain is alleviated knowing what a happy reunion they must be enjoying. Heaven has gained an angel with the brightest twinkle in his eyes.

Our deep felt thanks to his wonderful doctors and nurses at St. Mary's Medical Center and his home caregivers in the past few weeks. Dad is at peace and our hearts are full knowing this.

Friends are invited to join in the celebration of his life with a rosary at McAvoy & O'Hara 4545 Geary Blvd on Thursday February 7th at 7:00 Visitation at 6:00. Funeral mass at Star of the Sea 4420 Geary Blvd Friday February 8th at 10:30. In lieu of flowers, the family asks that contributions be made to Star of the Sea Church.

Our family would like to thank you all for coming here today to celebrate the long and happy life of our adored Aita, Aitaxi, Pierre, or to many of you “Ausquy”.  I know he cared about each and every one of you in this room, it means a lot to our family you being here.  I’d love to share a few fun stories that exemplified the wonderful man my Aitaxi was and how much joy he brought to us.

Aitaxi, I would like to thank you for giving us, your family, the opportunities we have due to your sacrifice, selflessness, and hard work.  While most people on their 21st birthday plan a drinking trip to Las Vegas, our Aitaxi took the courageous journey to leave everything he ever knew crossing the Atlantic Ocean to America, the land of opportunity, where he did not speak English and only knew a few boscos to work as a sheepherder in Wyoming for 8 long years.  Luckily, sheep speak Basque so he found company with the 1,000 sheep’s chorus of YES or “BAA” and of course his 2 best friends, the sheepherding dogs.  As kids we asked how he could keep track of so many sheep and not lose any, he taught us that one black sheep=100 white ones, when we asked how many black ones he lost, he looked at us like we were crazy, “NONE!” Aitaxi would tell us stories of Wyoming with freezing winters, him learning to bake bread/make soup, rattle snakes in his tent, and fun trips into the town of Buffalo, where he coined his first nickname with the local women: “Pretty Pete”! They were tough years but some of his most memorable.

8 years later, while nearing his 30th birthday, Aitaxi returned to his hometown in the Basque Country, Arneguy. Within the month he met our loving Nana at the party or “bexta” in Luzaide where she was from across the river, and they have been together ever since.  There have been some disputes as to how this initial meeting occurred 64 years ago, given the scenario we will go with my Grandpa’s side of the story: he was the best looking and had the best dance moves out of all the men; Grandma couldn’t resist!  (she may have a different one)

Our Aitaxi, was incredibly proud to be Basque.  At one point during this past Superbowl, he was telling the family that Tom Brady is Basque which obviously explains why he is so good. He was a very lucky man with my Amatxi’s amazing cooking, his favorite was “Xingara” which is a basque bacon.  At one meal he was convincing me that “Xingara” is a superfood packed with “Vitamins A, B, C, D” and a few other letters which don’t exist; I asked “even vitamin C”? He said “Boh, of course, lots of it!” most importantly you had to pair this miracle food with a good glass of red wine: “arnoa”! A hi-ball was his favorite aperitif, or a “light” screwdriver in his later years.

Of all the basque activities he loved, playing Mus was by far his favorite.  He could play for hours on end with his friends and family.  He would be so proud to win the lucrative jackpot of a couple dollars after Sunday lunches, and flaunt it around the house for the next week like a kid who got an A on their math test!  Aitaxi was a great player, he won the U.S. National championship twice, once with Dominique Erdozaincy in 1985 and again with Tony Laxage in 2003; he then went on to play in the world championships both those years representing the United States, we were very proud of him. AND…. he made sure to remind us of these championships whenever he would lose intense house games; in his thick accent, he’d say “I let you win, I feel bad, you’re a rookie.”  I’ve had the pleasure of being his partner over the past several years. If we won it was because of his good play, if we lost it was because “I am a beginner and you play too loose.”  We loved to argue about how he would never watch his opponent for passing signs, and they would have a field day.  Aitaxi was always more focused on his own cards or trying to pass a sign himself; although he would always defend with conviction that could see all the signs and no one could ever pass on him. As many of you know, playing with a partner for years, you get to know their “tell” signs and Aitaxi had several. My favorite being when he had 2 kings and wanted to lure his opponents into betting the game, he would look at the chips, count them,  say “Boh, we are so far behind it doesn’t matter, game is over anyway, Hordago” (in a defeated tone); even if we were only down a few points or even winning.  I loved that.

Aitaxi was a card shark, he loved to play mus, gin rummy, and at the casino: black jack.  If we went to a casino for 2 hours, about 1:45 min of it was spent scanning people and looking for a “hot” dealer; although we would never find that “hot” dealer.  He loved to go and interact with people, meeting new friends.   Anyone who called Arguello would be greeted with his warming: “Yeeellloowwwww”

I recall going to Giant’s games with him as a kid, and by the 2nd inning, he would know everyone around our seats, no one could resist his friendly banter and joyful personality.  I always admired how he could connect with people and truly see the good in them.  He also liked to help people, at one point Titu, a close friend of the family, lived with my grandparents. As part of his payment he would help Aitaxi garden.  Apparently on one hot day, Titu passed out from exhaustion.  Aitaxi jumped into action with the extensive medical training he had, and Titu woke up seconds later to find my grandfather performing mouth to mouth.  I would have paid good money to see that!

Aitaxi would not break rules; but he sure enjoyed bending them.  A big event in our family was the dreaded DMV written test, and we would study for weeks in preparation.  Years ago on test day, Aitaxi drove to the DMV, and to the family’s surprised returned to the house about 20 minutes later; oh no, he flunked.  Not so fast, Aitaxi did not know the answers, so he put the test in his jacket, slily walked out of the DMV, drove home, had Jackie fill out the answers for him, drove back and handed it in unnoticed hours later, PASSED! Another recent one, was last month in the hospital, when the nurses and strict daughters left the room, he tried to convince Maidere to help with his great escape out of the hospital or at least eat the horrible food for him since he had to finish it.  For Christmas, curious Ausquy would pay my Mom and Aunt a quarter for each piece of intel they provided on what the gift was he was getting that year.

Besides being his Mus partner, I also served as the IT technician for my grandparents which was a great responsibility.  My grandfather loved to watch 2 things most: Bay Area Sports and Judge Judy! He would make an early determination as to who was lying, and laugh when Judge Judy would berate someone.  “Oh that Judge Judy, she’s tough!” so you can imagine that when Comcast was not working we needed to fix it ASAP.  I would come over and perform the difficult task of repairing their cable, which required unplugging and re-plugging the unit for the fix; Aitaxi would think I was a genius.  One day, post fix, and reunited with his beloved ESPN, he stated, “Jean-Marc you are a very smart boy, one day you can be Vice President!”  I said, “Well Aitaxi, why not President? “ He laughed and said, “HAHA, Boh, President? You need to be REEEE-ALLL-ISSSTIC ok.”

Aitaxi you had 93 amazing years, and it is an honor to be your grandson.  You have taught me to love life, enjoy friends, and be a good man.  Until we meet again, forever your mutikua.