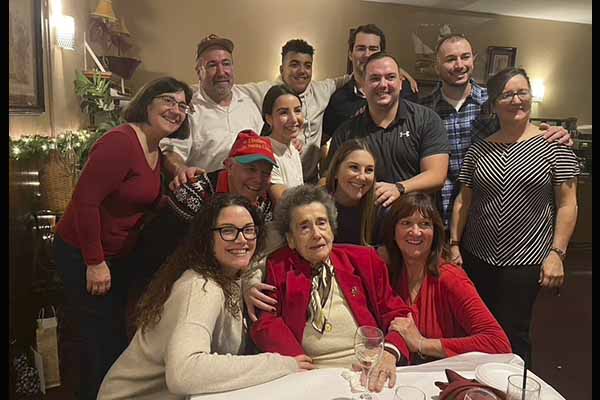 On Tuesday, February 1st, 2022, we lost our family’s matriarch and the matriarch of Centro Basco Hotel.

Dominica (Monique) Elgart Berterretche was born to Jose & Dominica Elgart on April 29, 1931, in Ispoure, France, in the Pyrenees Mountains along the border of France and Spain (Euskadi—The Basque Country).  Monique was an only child and felt that she grew up as a lonely child. This childhood was the basis for her wanting more than one child when she married. She lived with her parents and uncle in their home - Ardoinia. Alongside her parents, she learned to raise crops, livestock, and grapes. They also helped many soldiers during WWII and her and her dad helped some of them escape into Spain. She had many friends that she met during her “internship” at the Hotel de Pyrenees where she learned how to fold napkins, set tables, welcome guests, and learned to cook, a finishing school of sorts. This internship would serve her well when she eventually became the matriarch of Centro Basco Hotel in Chino, CA.  She grew up learning all the Basque dances and loved to dance.  On September 24, 1953, at the age of 23, she married Peyo Berterretche who had returned to France after working in Wyoming as a sheepherder. They welcomed the arrival of their first born, Michel in July of 1954. In the summer of 1955, they made the decision to immigrate to Wyoming for economic reasons, leaving behind their son Michel with ama’s parents. After a few months in Wyoming, ama basically put her foot down and said Wyoming was too desolate for her. So, from Wyoming they moved to Artesia, CA where Peyo worked on a dairy and ama took care of the boarders. Their daughter, Mayi was born in December of 1955.  In 1957, they moved from Artesia to Corona area where again they worked as a team on a dairy with boarders.  Their third child, Jeanne, was born in July 1959.

In 1963, they decided to move back to Ispoure to help ama’s parents with their farm and to be reunited with their son. After 14 months, having become accustomed to the American way of life and realizing that the American Dream was still alive, they moved back to CA; first to Corona on the Bischaichipy dairy and then to Pomona on Philips Blvd working on a dairy. Both Joseph born in 1965 and Bernadette born in 1967 were born on the Philips Blvd dairy.  In 1970, an opportunity to lease the Centro Basco business became available.  Ama had always had a dream and a desire to own a restaurant, and this was their opportunity.  On July 1st, 1970, they took over the business from the Gariadors and a new tradition started.  Ama and aita (dad) took in many boarders in the early days and fed countless number of friends and customers; many of whom became dear friends over the years.  Her cooking was a mainstay of many baptisms, 1st Communions, weddings, funerals, birthdays, breakfasts; any occasion to set a table and feed her customers and friends was a source of joy for her. She mentored Joe to replace her as the head chef; and she mentored Bernadette in the many aspects of running the restaurant. She always had a welcome smile and made people feel right at home. Many of her children’s friends came to consider ama as their second mom and she had no qualms keeping them in line if they got too boisterous or rambunctious.

Largely influenced by their Basque heritage, ama and aita were strong, hard-working, ethical, and loyal to each other.  Aita’s passing in October of 1999 left ama a widow and without her life partner. But she continued the restaurant business until her retirement at which time Joseph and Bernadette continued to run the business.  Aita’s passing overshadowed the pain she felt when Michel died in 1976. Once retired, Ama loved her scarfs and beautiful jackets.  She was always dressed beautifully and still came to the restaurant every day to oversee the operations. She was proud of her grandchildren and great-grandson and their accomplishments. Her health had started to falter a few years ago and she hated the fact she couldn’t walk, hear very well, or see very well. But her mind was sharp to the end, and she loved sharing so many stories.  She saw a lot, laughed a lot, lived a lot, suffered, but accomplished so much in her life.  We were fortunate to have her at Alexis and Tim’s wedding this past May. She is now seated at God’s banquet table next to Aita. What a feast they are enjoying!!

Monique died the night of February 1st, 2022. She is survived by her four children: Mayi Petracek (Chris) (and their daughters, Alexis Snead (Tim) and Kristyn Petracek; Jeanne Berterretche and her daughter Michelle Sorarrain Berterretche and Michelle’s son (Damien Kelly); Joseph Berterretche (Gina Marie) and his daughter Taylor; Bernadette Helton (and her sons, Marcus Helton and Peyo LaFrance); her sister-in-law in France, Gracianna Delmas; along with numerous nieces and nephews here in the states and also in France.

In lieu of flowers, the family requests that donations be made to either Shriner’s Children’s Hospital of Los Angeles or the Chino Basque Club Scholarship fund.