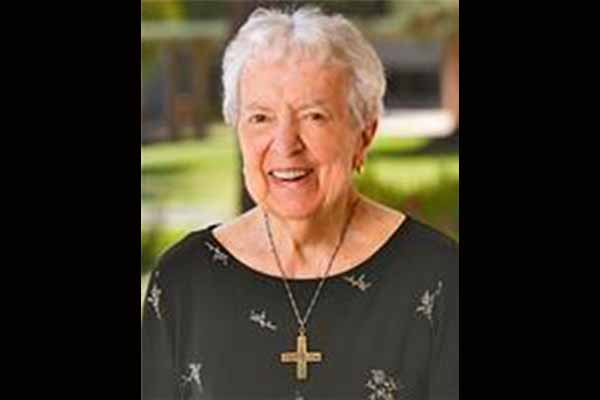 We remember with gratitude the life of Sister Mary Laxague who was a Sister of Notre Dame de Namur for 71 years. She died peacefully at Sequoia Hospital in Redwood City, California. Throughout her life Mary was known for being gentle, soft-spoken, attentive to others, and very kind.

Born in Ely, Nevada, the youngest of four children, Mary Jeanne Laxague was proud of her Basque heritage, as both her parents were born in that region of France. Her father was a shepherd and brought his skills to Idaho and then to eastern Nevada, becoming an independent sheep rancher. Mary's mother provided meals for the ranch workers.

Mary entered the Sisters of Notre Dame de Namur (SNDdeN) in 1951 after graduating from the College of Notre Dame, now Notre Dame de Namur University (NDNU) in Belmont, California. A lifelong dedicated educator, she ministered in Catholic high schools in Marysville, Watsonville, and Seattle. For more than 30 years she was a member of the CND Business Department faculty and served as Dean of Students. She lived with the college students in St. Joseph's Residence Hall during that time. She once said, "My experience at NDNU was one that enriched and challenged me and though I served there for 33- plus years, I never had a chance to become weary." A major road on campus, Laxague Drive, was named in her honor.

Sister Mary served on the Leadership Team for the California Province of the SNDdeN from 1999-2004. In 2003, Sister Mary became a member of the Belmont Notre Dame Province Center community.

Daughter of Antone and Catherine Oillarburu Laxague, sister of Joseph Laxague (Opal), John Laxague, and Helen Laxague Anderson (Earl) all deceased. She is lovingly remembered by her nieces Mary Kay Jacobsen, Toni Laxague Jahns (Tim), and nephew Robert Anderson (Mary). She was preceded in death by her niece Mary Sue Laxague Rhea (Harry). Aunt Mary will be fondly remembered and greatly missed by several great nieces and nephews as well as several great, great nieces and nephews, Mary will also be remembered by her many friends, former students-especially alumni and coworkers from NDNU-and by her Sisters of Notre Dame de Namur.

A Mass will be celebrated for Sister Mary on Monday, September 19, 2022, at 10:30 a.m. in the Cunningham Memorial Chapel on the Notre Dame de Namur University campus. The burial will be at 2:00 p.m. at Holy Cross Cemetery in Colma, California. Contributions in her memory may be made to Sisters of Notre Dame de Namur, 1520 Ralston Ave, Belmont, CA 94002, or online at snddeneastwest.org.