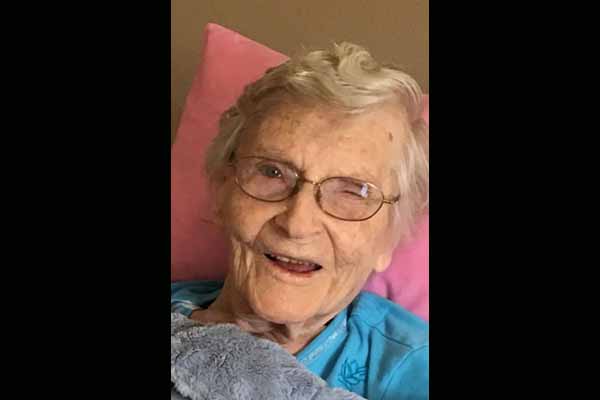 Helene Etcheverry passed away peacefully in her sleep on October 2, 2021, at the age of 100.

She was born to Simon Santana and Stefanie Anchartechahar in Ayacucho, Argentina on August 6, 1921. Her parents had relocated to Argentina about 10 years prior with the dream of work and a better life. Then after her mother's brother was killed in WW1 and at the request of Stefanie's family, they returned to the Basque country to take care of the family farm, "Gerechitenia" in Saint Martin d'Arrossa, in the mountains of the Pyrenees. Traveling across the Ocean in those days was a big undertaking, but they returned to the family farm with 4 little girls and a 5th to be born shortly after their return. Life on the farm was not always easy, but Helene loved working in the fields with her father and caring for the animals. On Sundays, she would spend the afternoons with the nuns learning different types of needle work. She was good at it and liked sharing that knowledge with anyone who cared to learn. Growing up in the Great Depression, surviving World War 2 and a Nazi occupation of her homeland grounded her in ways that helped her deal with extreme hardships for all of her life.

Helene married Joseph Etcheverry, a young man from the neighboring farm, in February of 1946 after his return home on leave from the service. Joseph had been living in Nevada when he learned the devastating news of the invasion and brutal occupation of his homeland. He enlisted in the U.S. Army and participated in the invasion of Normandy in June of 1944.

Shortly after their wedding, Joseph returned to Nevada to try and procure a sponsorship for Helene and soon to be son Alexander. In 1947 Louise Jenkins Marvel of the W.T. Jenkins Sheep Company, signed the papers of sponsorship for Helene and young Alex. Louise was a kind woman who liked the Basques and throughout the years made it possible for many to immigrate to the United States. The first few years were difficult ones for Helene, because as many of you know the green grass in most parts of Nevada does not compare to the green of the Pyrenees. But she got on with the building of a home for her growing family which had grown to three boys, Alex, John, Raymond and a daughter Bernadette.

Her Basque legacy had always been her strong connection, not only with family but with the friends that she grew up with.

Our Amatxi loved to work in her garden, tending to her grapes. She loved to read, and her needlework took up most of her spare time, but Matxi's best talent was in making sure you were well fed. Her house was never short of cookies and not many people went without a cup of kafea esnea (coffee lolo for the younger ones).

In 1986 at the age of sixty-five, she finally accomplished her decade's long dream of becoming a United States Citizen. She loved America and was always grateful for its help during the war. Also, she was grateful for the kindness she received when she arrived as stranger to America who couldn't even speak the language. Once naturalized, Helene never missed a chance to vote. Her greatest joy would come from watching and American Flag waving in the breeze, and she couldn't listen to the Star-Spangled Banner without it bringing tears to her eyes. She was a Basque American and she loved this country.

Helene was preceded in death by her parents, her husband Joseph, her son Alexander, a granddaughter Michelle, two grandsons Jacob and Randy, and her sisters Marie, Catherine, Stefanie, and Marie-Angel. She is survived by her sons John (Susan), Raymond (Brenda), her daughter Bernadette (Joel), 14 grandchildren, 29 great grandchildren, and 13 great-great grandchildren. Amatxi showed us her love every day of her life, and she will live in our hearts forever.

The family would also like to thank Araceli Eusebio for the love and care and kindness that you showed for our mother, we are forever grateful.

There will be a graveside service at the Battle Mountain Cemetery, in Battle Mtn. Nevada. Sunday October 17, 2021 at 3:00PM